Braith Anasta has denied any wrongdoing after the former Roosters skipper learnt he was privately blamed for Wayne Bennett being caught breaching the NRL’s biosecurity rules.

There may be a new chapter developing in the book of feuds following revelations Anasta, a South Sydney junior and nephew of Rabbitohs legend George Piggins, was at Grappa at the same time Bennett was dining at the restaurant with his partner during the week. 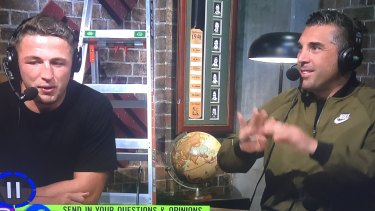 Souths officials are divided over how the NRL found out, but Anasta, who is close friends with Rabbitohs assistant coach Sam Burgess, denied suggestions he was to blame for Bennett's demise. ‘‘It’s absolute rubbish.’’ Anasta said. ‘‘It’s none of my business.’’

Bennett didn't return calls when contacted on Friday night. The veteran coach has been forced into a 14-day isolation period before he can resume duties with Souths, but is still expected to help prepare the team through phone calls and Zoom meetings.

Meanwhile, the Broncos had to travel to Sydney for Friday's clash against the Rabbitohs without Allan Langer and staff members Ryan Whitley and Blake Duncan after the club alerted the NRL to a COVID-19 breach. The Brisbane trio attended the Caxton Hotel to celebrate Langer's birthday following last week's loss to the Sharks.

NRL and Broncos sources have told the Herald the private birthday function was upstairs at the Caxton, away from the general public.

All three staff members will be forced to self-isolate for seven days and have tests before linking up with the Brisbane squad.

The isolation period has been set at only seven days as the trio have shown no symptoms and the rate of community transmission is next to nil in Queensland.

"To adhere to best practice, the staff members won't travel for [Friday night's] game in Sydney against the Rabbitohs," the Broncos said in a statement.

USA here to stay in Australian football, but I don’t have to like it

Young Bloods scrape home against the odds in Hobart thriller