Veteran James Graham has slammed the NRL judiciary, describing Brisbane forward Tevita Pangai's five-week ban for a crusher tackle as over the top.

Pangai's season might be over after unsuccessfully trying to get a downgrade for his hit on Penrith's James Maloney. 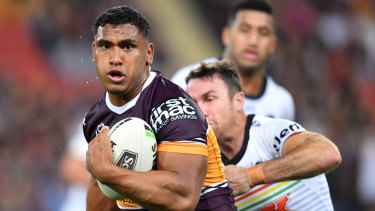 Tevita Pangai has been suspended for five weeks for his crusher tackle on James Maloney.Credit:AAP

The Broncos' enforcer on Tuesday night contested a grade-two dangerous contact charge but the suspension was blown out to five weeks due to carryover points from three different offences in the past two years.

Pangai – who would have been sidelined for four weeks with an early plea – can only play again this year if Brisbane reach the preliminary final.

"It does seem excessive. I know there is loading but five weeks for that – it seems a bit over the top," St George Illawarra hard man Graham told Fox Sports' NRL 360.

"It just seems going to the judiciary is a bit of a lottery this year.

"You just don't know what you are going to get."

Asked what punishment the tackle deserved, Graham said: "Possibly a penalty was sufficient.

"If I was a Penrith player, I would have been up in arms about it but I don't think it warrants five weeks."

Wests Tigers veteran Benji Marshall even questioned whether there had been forceful contact from Pangai on Maloney.

"The reaction of Maloney makes it seem like there wasn't that much pressure on his neck – he got straight back up," he told Fox Sports.

It is a major blow for seventh-placed Brisbane ahead of a finals tilt after already losing halfback Jake Turpin for two games.

Turpin took an early plea after he was also hit with a grade-two dangerous contact charge over a swinging arm in Brisbane's 24-12 win over the Panthers.

They must find a way to fill the void left by Tongan international Pangai.

Pangai admitted it would be tough to watch from the sidelines but was heartened by this week's return of Broncos veterans Matt Gillett (back) and Alex Glenn (knee).

"We've got some great players back [from injury]. Matt Gillett, who I admire as a player, he'll do a great job, and Alex Glenn, he's back as well," Pangai said.

"And we've got a young crop of forwards who won't let the fans down."