Australia sealed a place in the Rugby League World Cup semi-finals with a record score in their 92-0 thumping of France in York.

Brad Donald’s side surpassed the 88-point record margin set in the last World Cup in 2017 against Canada, running in 17 tries to set up a final group game clash with New Zealand on Thursday (Friday AEDT). 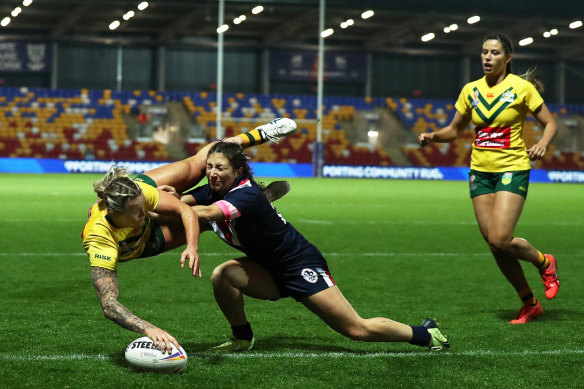 Undefeated New Zealand brushed aside the Cook Islands earlier on Sunday (Monday AEDT) in a 34-4 win. Australia and New Zealand will square off for the chance to top Group B.

“It was really clinical,” Donald said. “The zero [was most pleasing] … We haven’t got a best side, you could pick anyone from the 24 and they’d perform similarly. There’s a lot of post-contact metres in those Kiwi forwards, so we have to make sure we are on our game defensively.”

In Group A, both England and Papua New Guinea are assured of a place in the semi-finals.

Winger Shenae Ciesiolka scored after two just minutes, kick-starting the Jillaroos’ dominant first half to finish 58-0 at the break. 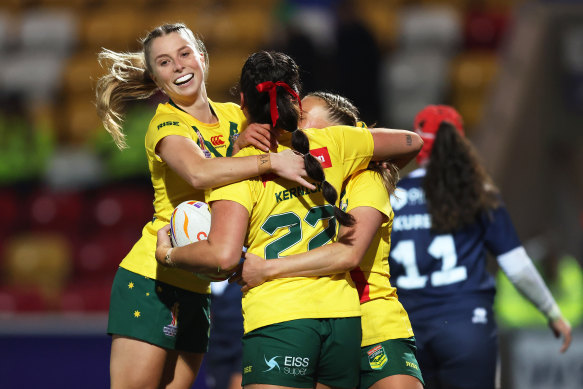 It was another harsh reminder of the disparity between Australia and the rest of the world.

Australia have yet to concede in this campaign and the chasm between players exposed to the NRLW and those who haven’t, has been laid bare.

“We’ve got an open door policy on what we’ve done and we’d love to share that with any nation,” Donald said. “They all work but they have transitioned from amateurs into professionals, like Olympians.

“We would be more than happy to share our programs on what these girls have done to raise the bar.”

Rugby: All Blacks head coach Ian Foster opens up on personal criticism – and has a message for fans after first season in charge