A showdown between the AFL’s two biggest drawcards looms after Lance Franklin pulled up strongly from his comeback game, putting him on track for Saturday’s clash against a Dustin Martin-led Richmond.

Franklin kicked three goals and moved freely in the Swans’ 33-point win over Adelaide – an impressive showing in his first top-level outing in more than 18 months. 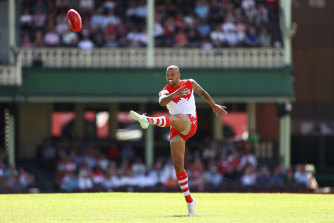 Lance Franklin has pulled up well from his first AFL game in more than 18 months, coach John Longmire says.Credit:Getty

Franklin was spared from the final exchanges of the game by coach John Longmire, who is taking every precaution with the superstar and is being guided by a physical “framework” that will dicate which games he will be used for.

“He’s OK today. We’ll see how he goes over the course of the week,” he said.

“To be able to get to the stage where with 10 minutes to go we could look after him [was pleasing] … we’ll get him right and then build on what he was able to do, both from the gym and out on the training track.

“After the preparation he’s had, we won’t put him at risk. We’ll use that as an underlying philosophy and we’ll work with him as the weeks go.” 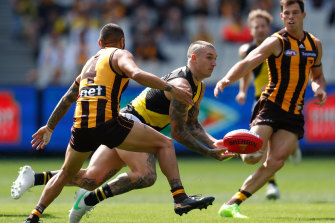 Dustin Martin’s Tigers were too good for the Hawks on Sunday.Credit:Getty Images

Martin was brilliant once again in Richmond’s 29-point victory over Hawthorn, with 11 score involvements – including two direct goal assists and one goal for himself – amid his 28 disposals and more than 500 metres of territory gained.

The Hawks elected not to put a hard tag on him and paid a heavy price, with Longmire confirming a lockdown job was a possibility for a player he said boasted a “just extraordinary” record in finals and grand finals.

“He’s as good a big game, one-on-one player as I’ve seen. He continually puts it out there and plays well all the time,” Longmire said.

“He’s a challenge against the opposition – I’m sure he inspires his teammates who are able to see him do it every week.

“But that’s OK, we’ll work through that and plan for him. He’s a very good player but they’ve got plenty of very good players, the Tigers – that’s why they’ve been so successful.”

Longmire said it was “pretty hard to divorce the coach in me to the fan” when asked if there was part of him that would, like many neutrals, love to see Franklin and Martin share the field at the MCG this weekend.

The Swans have a five-day turnaround next week, with a home game against Essendon to come next Thursday night, and Franklin is highly unlikely to play in both.

Sydney will face Richmond only once this year; assuming Franklin does not play beyond the final year of his contract in 2022, that means there is a maximum of three more opportunities for him and Martin to do battle, outside of finals.

The Swans have stunned the AFL world by starting the season 2-0, powered by a dynamic, attack-minded brand of football, and Longmire said there was no better litmus test to see how far they’ve really come than four quarters against the Tigers.

“Whatever comes out of this game, we’ll be learning, and that’s a great way to be,” he said.

“We go to the MCG and play them on their home deck, the best team over recent years – what a wonderful opportunity for us to keep on learning, and that’s what we’ll continue to do.

“We’ve got to make sure we approach it with the same approach, whether it’s Brisbane up there, Adelaide here or Richmond at the MCG … have a real go at the best team in the competition.”

Cats begin to assemble the post-Kelly gang with local