North Melbourne coach David Noble has called on supporters and the club to remain calm in the wake of their 128-point thrashing at the hands of the Western Bulldogs on Good Friday.

The Kangaroos were uncompetitive in the second half, conceding 10 goals in the final quarter after giving up more than 100 points in the match to turnovers. 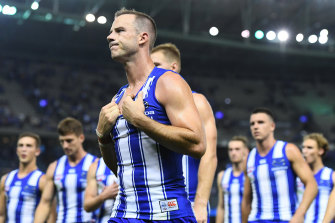 Dejected Kangaroos players take in the loss after their thrashing by the Western Bulldogs.Credit:Getty Images

“We just need to be calm. We are on a journey. We understand it,” Noble said.

“There are hiccups along the way and yes today is a bigger one than maybe what we have had but I have been through this two or three times before.

“We just need to be really composed on where we are going.”

However Noble, who helped lift the Brisbane Lions from the bottom into a preliminary final as football manager alongside Chris Fagan, said the supporters were entitled to expect a response from the current group of players when they play Adelaide next week.

He said there was always something at stake for players as they attempted to establish their career or retain their place on the list. 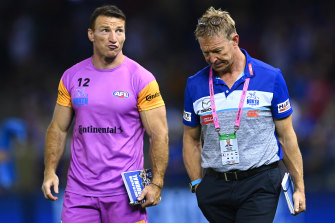 “I’m annoyed. I want to win. As I said last week, I am not here just to have 12 months of development, so the expectation is if you are playing this level of footy you come to play every week.

“And if you don’t come, that comes with consequences either in selection or at the end of the year.

“The players have got a pretty clear idea what that actually looks like and we have not been able to deliver that so we need to go away and assess that ourselves as a coaching group and as a group [of] players and remain really calm and really clear on what we need to deliver.”

Noble said he didn’t think the result would impact on the Roos’ right to play on Good Friday, declaring that if access to marquee games were based purely on results then every marquee game should be assessed on the same basis.

There were 28,483 supporters at the match with spectators, players and officials standing and clapping before the first bounce to acknowledge the work of staff at the Royal Children’s Hospital.