Australia sealed another World Cup title with a comfortable win over Samoa in the men’s final at Old Trafford on Sunday morning (AEDT).

After a spate of players decided to represent Pacific nations before the tournament, who starred and who didn’t for Mal Meninga’s men?

James Tedesco 8.5/10
Cometh the hour, cometh the captain. Warmed into the tournament and produced his best in the final with a two-try effort. Has really grown into the role of NSW and Australian captain and will have the Kangaroos No.1 for as long as he wants.

Josh Addo-Carr 9/10
Superb. Should be remembered as Australia’s player of the tournament and scored freakish tries against Scotland and in the semi-final against New Zealand, finishing with 12 four-pointers overall. Couldn’t get the one in the final he needed to break Valentine Holmes’ record, but must be a NSW inclusion next year.

Latrell Mitchell 8/10
By his own admission, wasn’t convinced he should tour a few months ago but has looked right at home in the Kangaroos jersey. Relished his time alongside Addo-Carr and bagged two tries in the final.

Jack Wighton 7.5/10
One of only a few spots Mal Meninga had a question mark over, but more than justified the coach’s faith with a strong tournament playing on his non-preferred right edge. Always looks at home in a representative jersey. 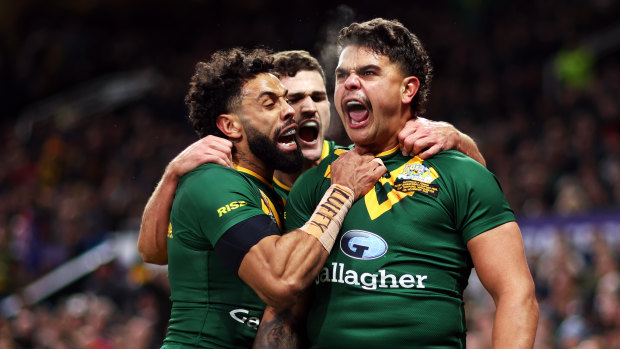 Valentine Holmes 7.5/10
Maybe unlucky not to be a permanent starter in the centres, but was more than reliable across a couple of positions throughout the tournament. His return to rugby league is well and truly complete now.

Cameron Munster 7.5/10
Not the spectacular Munster we’re used to seeing throughout the tournament, but didn’t really put a foot wrong. Finally looked like he was clicking better with Nathan Cleary in the final, where he produced another one-on-one steal with his team on the back foot. That was an easier task than calling Wayne.

Nathan Cleary 7.5/10
Got better with every game. Tried hard, but his combination with Munster remains a work in progress. Saved his best game for the decider, playing a hand in four Kangaroos tries. Goal-kicking wasn’t at his lofty standards.

Reagan Campbell-Gillard 7/10
Battled a minor injury throughout the tournament, but stood up as a real forward leader and didn’t let clubmate Junior Paulo get the best of him in the final. Has his spot for a while now after the defections of Paulo and Josh Papali’i. 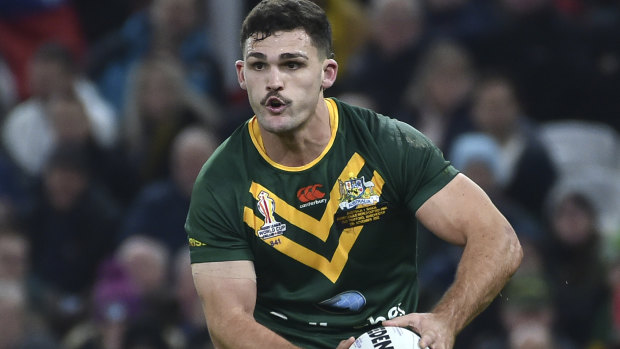 Nathan Cleary turned his best performance of the tournament in the final.Credit:AP

Ben Hunt 7/10
Used the same way he is for Queensland in tandem with Harry Grant and produced the miraculous kick which got Australia into the game in the semi-final. Threw an intercept and made a couple of errors at Old Trafford, but did the job nonetheless.

Jake Trbojevic 7/10
Never really puts a foot wrong and again proved how valuable he is in a representative jersey, cleaning up any mess around the middle without fanfare. Solid tournament.

Liam Martin 8/10
Only enhanced his reputation as an elite back-rower and got better as the tournament went on. Bagged a try in the final and didn’t let clubmate James Fisher-Harris stand over him in the semi-final. One of the Kangaroos’ best.

Angus Crichton 7.5/10
Potentially a surprise choice as a starter for the tournament, but justified the faith of coaching staff and can be another key cog in the title defence in France in 2025. 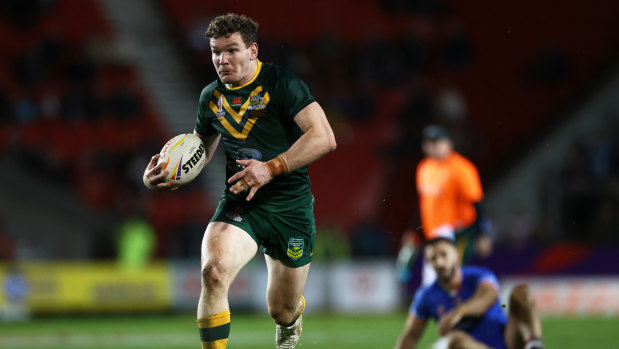 Liam Martin had an outstanding tournament.Credit:Getty

Isaah Yeo 7.5/10
Didn’t have the same dominance as he does at NRL level with the Panthers, but will only benefit after another workmanlike tournament. Never skipped a beat in the final and deserves a rest after a huge year.

Tino Fa’asuamalaeaui 6.5/10
Only used as an impact weapon at the business end of the tournament after some strong showings in the pool games against minnow nations. One of the few who stayed loyal to the Kangaroos when Pacific nations came calling and will have his spot for years to come.

Cameron Murray 8/10
Used off the bench and came up with crucial plays in both the semi-final and final, including the match-winning try against New Zealand. Combination with Nathan Cleary gets better and better. Future Kangaroos captain.

Harry Grant 8.5/10
So damaging off the bench and again gave Samoa headaches around the ruck after Ben Hunt took the sting out of the game. Cemented his spot in the green and gold above Damien Cook and Api Koroisau and could make another two or three World Cups. 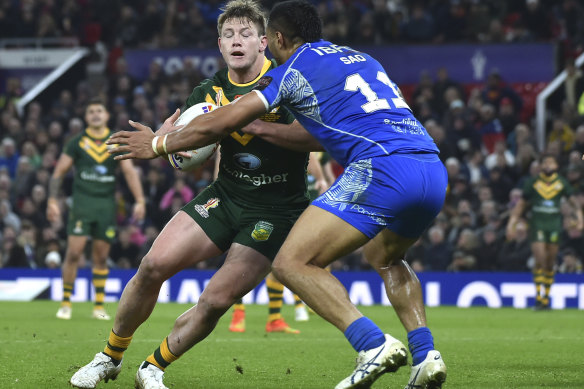 Harry Grant is looking like a Kangaroos fixture for years to come.Credit:AP

Patrick Carrigan 7.5/10
Who would have thought he’d finish his year on this note? Superb in the Origin series, was probably the reason the Broncos missed the finals after his suspension and then found a home in the green and gold. Tidy performance in the final.

Daly Cherry-Evans 6/10
Might have played his last game in the Kangaroos jersey, but only because he’s got a generational freak in front of him. Showed flashes against the lesser lights in the pool stage and will remain in Meninga’s thoughts.

Jeremiah Nanai 6.5/10
Man of the match against Italy earlier in the tournament and looks a real Kangaroos star of the future. Provided Meninga with selection headaches for the finals, but didn’t quite get the nod. His time will come.

Matt Burton 6/10
Made his debut against Scotland helping engineer Josh Addo-Carr’s freakish try and was given a second game against Italy. Plenty of time to cement a spot in the future.

Lindsay Collins 6/10
Missed the start of the tournament through suspension, but had a run in three straight games, including the quarter-final against Lebanon. Meninga will want him to keep improving as he tries to shore up the front-row stocks.

Reuben Cotter 6/10
Had a couple of games in the pool stage, but missed one through concussion protocols. Breakout year and will be provided more opportunities in the future.

Campbell Graham 6.5/10
Perhaps a surprise tourist given he was on the verge of playing for Scotland, but can perhaps consider himself a little unlucky to not feature in the business end after five tries in two games. More than did his job.

Murray Taulagi 5.5/10
Picked up a couple of tries against Italy after making his debut in Australia’s opening game against Fiji. Like Nanai and Cotter, another Cowboy who had a stellar year and can be pushing for higher honours before the next World Cup.

Star Storm will do ‘whatever they can’ to keep