The Dolphins have finally struck a blow on the recruitment front, making premiership-winning Melbourne forward Felise Kaufusi their first signing.

Kaufusi has signed a three-year deal to join the Dolphins, almost a month after the new franchise entered into the playing market. The Redcliffe-based outfit has missed out on a slew of off-contract stars including Reed Mahoney, Christian Welch, Cody Walker and Tino Fa’asuamaleaui, who have all committed elsewhere after testing the market. 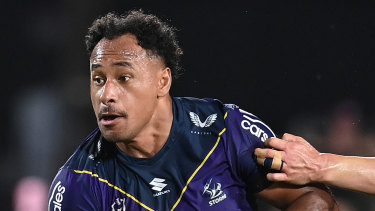 Felise Kaufusi has signed for the Dolphins.Credit:Getty

However, Kaufusi, an Australian and Queensland backrower, has opted to become the first man to join Wayne Bennett’s new team.

“It is imperative the Dolphins build a squad that contains players of representative calibre and Felise certainly fits that mould,” said Dolphins’ chief executive Terry Reader.

“He has played 12 Origin matches for Queensland as well as representing Australia, so will bring some important experience to the playing group we are building to debut in the competition.

“The fact that he grew up in Bundaberg is also a positive for Queensland’s newest professional sporting team.

“Felise has been part of a very successful era for the Storm club in recent years, so we are excited about the leadership and strong work ethic he will bring to the Dolphins.”

Kaufusi’s departure could free up funds for the Storm to divert towards the retention of another Dolphins target, Brandon Smith. The Roosters are also considered a frontrunner for Smith’s signature.

‘Clearly right at the top’: Horne-Francis firms as North’s No.1 draft pick