The Brisbane Lions men’s team will remain in Victoria indefinitely, with their travel plans to return to Queensland put on hold within hours of their flight’s scheduled departure.

Sources close to the situation said the team was on the bus ready to leave for Melbourne airport but had been pulled off and were now awaiting further instructions. 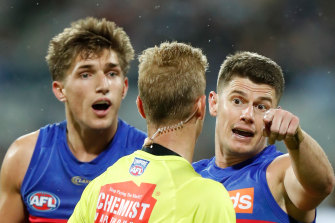 Grounded: The Lions will stay in Victoria indefinitely.Credit:Getty Images

The Lions are due to face Collingwood at the Gabba on Thursday night.

The Brisbane women’s team, also due to fly out of Melbourne on Sunday, were set to leave on an earlier flight and had reached the airport, but it is unclear whether they departed.

With the AFLW ladder still not finalised, the Lions will not know if they have earnt the right to host a final next week until later on Sunday.

Lions players and officials were among more than 15,000 people in Victoria who were ordered to get coronavirus tests after a second case of locally acquired coronavirus was discovered in Queensland.

Although Queensland government restrictions remained unchanged as of Saturday night, the AFL was busy planning contingencies in the event the two current local COVID-19 cases trigger lockdowns and border closures in the sunshine state.

Brisbane’s AFL and AFLW teams were in Victoria for matches against Geelong and Melbourne respectively.

Footy fans who had travelled to Victoria from Brisbane were asked to leave Friday night’s match in Geelong between the Lions and the Cats to get tested.

Meanwhile, the NRL has instructed its clubs to call back any players who planned to play in the Queensland Cup competition this weekend.