McDonald, the No.4 pick at last year’s draft, is one of three Swans youngsters in the mix to play their first senior matches against the Brisbane Lions on Saturday night at the Gabba, along with impressive academy graduates Errol Gulden and Braeden Campbell. 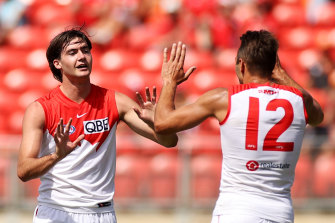 Swans draftee Logan McDonald may not have to wait long for his first taste of AFL footy.Credit:Getty

McDonald, 18, is seen as the long-term successor to Lance Franklin in Sydney’s forward line and showed glimpses of his incredible promise in a pre-season cameo against the Giants a fortnight ago.

But given Franklin’s absence and the Swans’ lack of other quality tall options in attack, the West Australian may not have to wait very long for his first taste of AFL action.

Longmire said multiple factors would dictate McDonald’s involvement or otherwise, but the calibre of his probable opponent – Brisbane star Andrews, who is arguably the game’s premier key defender – wasn’t one of them.

“These young blokes when they come into the team, there can be high expectations on them, but we’re also conscious that careers aren’t built overnight – we need to take small steps before you get going,” Longmire said on Monday.

“We also know that at some point, you need to take a step, and that’s against whatever defender you play on … when you play your first game at AFL level they’re going to be really good. You look at [McDonald] and think he’s going to be a short, medium and long-term player – it’s not just about this week.

“If you’re looking at this week’s game, absolutely in a tall-forward sense, could he help us? Yes, he could … [but] it’s not just about Logan, it’s about all the players that could play that role for us, and then it’s about how many we take in for that first game.”

Longmire mentioned Hayden McLean and Joel Amartey as Sydney’s other options to join Sam Reid in the forward 50, but McDonald’s use throughout pre-season would suggest he most likely is the frontrunner, and he already has experience playing against men after coming second in the WAFL’s leading goalkicker standings last year.

Former West Coast great Glenn Jakovich has previously warned the Swans against overusing McDonald, telling The West Australian the club risked burning him out if he was played too often in his debut season.

Franklin, meanwhile, trained on Monday but Longmire could give no further update on whether he will be ready to face Adelaide in round two at the SCG.

“He had a fantastic session here on Saturday. We’ll just wait and see. We’ve got a framework of decision-making around him and then the detail of that, we move from session to session based upon how he’s feeling,” he said.

Longmire also expected Callum Mills (concussion) and Jake Lloyd (knee) to be right for the trip to Brisbane after sustaining minor knocks in their clash with the Giants.

Bruhn kicked four goals against the Swans after being scooped up with pick 12 at last year’s draft, but Flynn has had to wait much longer for his opportunity – the Narrandera product, who joined the Giants’ academy at age 12, has been on their AFL list for more than five years but hasn’t played a game until now, partly because of an unfortunate run with injury.

“He walked into our footy club about 1940-odd days ago. It’s a wonderful story,” Cameron said. “When we let the players know … there was a lot of emotion in the room because they know how hard Matty’s worked to get this opportunity.

“It puts a smile on my face. With AFL footy, it’s so hard, it’s brutal … Flynny hasn’t had a lot of good luck over the last couple of years and he gets a great opportunity on Sunday.”

From the Archives, 1993: The first AFL final played under lights a thriller

Eels contracts no distraction in upset by Knights: Arthur