The Carlton squad could not split Harrington and Loynes when they voted on the captaincy during their pre-season camp last weekend, so it was decided the pair will share the duty in 2020. 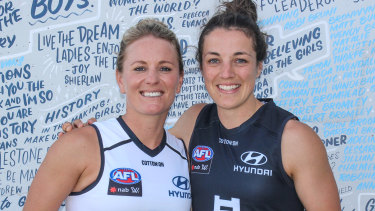 Alison Downie, Sarah Hosking and Nicola Stevens will join the co-captains in the leadership group.

“I have been a Carlton supporter all my life and to now captain this club is just surreal. I’m still getting my head around the prestigious honour of being a captain of the Carlton Football Club,” Harrington said.

“This group is really special to me and it’s a privilege to be voted in by my peers. I can’t wait to lead the girls out with 'Loynesy' against Richmond in round one: bring it on.”

Loynes added: “This club has been my home since day one — it’s amazing to think back to my first training session in 2016 and the journey that has led me to this moment.

“This opportunity is incredible and doing this alongside my great friend ‘Kez’ makes it even more special.

“We have a really exciting group which took great strides forward in 2019 and we are ready to hit the ground running in season 2020.”

Loynes, 33, has been part of Carlton's midfield since AFLW began, known for gritty physicality, a high work rate and clinical hands at the bottom of packs.

She won the club best-and-fairest in 2018, tied with Breann Moody, and was vice-captain for 2019.

Harrington, 27, moved into footy from basketball for the 2018 season and she joined the leadership group before her debut.

She is a dominant defender, particularly with her intercept possessions, earning All-Australian selection in 2019.

Carlton again play the AFLW season opener in 2020, against Richmond at Ikon Park on February 7. The Blues lost last year's AFLW grand final to Adelaide at the Adelaide Oval.

Concussion subs may be in place for Ashes