Richmond celebrated the return of champion midfielder Dustin Martin with an ominous performance against Collingwood as they introduced a touch of the new to breathe life into the yellow and black outfit that refuses to go out of fashion.

This match was meant to mark the return of Martin but in the first half it appeared as though it would go down in the history as the game that signalled the return of the key forward, as Tom Lynch went berserk to take a lead in the Coleman Medal, putting the game the Tigers eventually won by 27 points beyond reach.

By half-time Lynch had gathered a remarkable 18 disposals, kicked five goals, won nine contested possessions, took eight marks and was involved in 10 score involvements – a display that would have made former Richmond great Royce Hart proud. 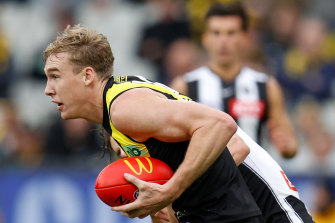 On fire: Tom Lynch was the difference for the Tigers.Credit:Getty Images

Lynch did so matched up against All-Australian defender Darcy Moore, who had no answer for the dual premiership goalkicker once his confidence grew after he was given too much latitude early in the match.

The 29-year-old could have had seven by the long break too after spraying a set shot out on the full from directly in front and missing a snap shot after receiving an early free kick just 10 metres out. 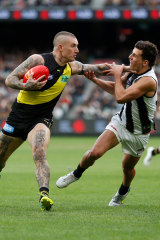 Dustin Martin thrilled the Tigers faithful in his return.Credit:Getty Images

Maurice Rioli was supporting Lynch’s efforts at ground level with two tackles that led to goals and a deft piece of ball control on the boundary, which enabled him to kick to Lynch in the goal square while Trent Cotchin and Jack Graham dominated contested ball.

The Magpies attempted to counter-attack, dispensing of their early method that saw them build up attacks to use the forward handball to devastating effect in a 10-minute patch in the second quarter that brought the margin back to within a kick. Under coach Craig McRae, they can do that, experimenting with their style like a band might introduce a new song midway through a gig. It is heartening for their fans but remains a work in progress.

In that phase Jack Crisp was electric, his hard running creating overlap through the middle that gave the team’s forwards a chance to mark on the lead. But Ollie Henry missed a set shot that would have drawn the Magpies within a kick and from then on, Richmond dominated, kicking the final three goals of the half.

The Magpies had three players, Taylor Adams, Brayden Maynard and Nick Daicos, under a cloud, and they battled to have their usual impact, but Jordan De Goey and Scott Pendlebury were very good.

Martin brought the crowd to life in the first quarter when he handed out his first fend off to Daicos, and then he had the Tiger faithful roaring with a goal in the second quarter.

Unfortunately, the umpire had not read the script, paying Isaac Quaynor a free kick as the ball dribbled through the goal after adjudicating Martin had pushed Quaynor in the back.

Martin, who missed six matches for personal reasons, put his arms out to question the decision in the placid manner he normally displays and incurred, much to his surprise, a 50-metre penalty. It was clear he was as much rusty as Dusty in his first game back.

However, in the second half Martin kicked two goals, with the crowd hailing his return like an old friend, while Will Hoskin-Elliott took a screamer in the dying stages that will be a mark of the year contender.

Maurice Rioli lights up the MCG

Richmond’s supporters have been spoilt since 2017, and they look likely to enjoy the football for a few more years yet watching the career of Rioli junior unfold. The son of Norm Smith medallist and football great, Maurice senior, who died in 2010, is exciting. He set Richmond on the path to victory with two chase-down tackles early in the second quarter that led to goals to teammates. Then he showed his brilliant ball control to set up a Lynch goal late in that quarter, and Jack Riewoldt received silver service late in the match. A lightning pass under pressure to Kane Lambert in the third quarter revealed exquisite kicking skills.

The small forward might have become a public figure at world record pace in 2022, winning an Anzac Day medal and attracting media attention. That doesn’t seem to have impressed the Tigers, with Rhyan Mansell taking a chance to ram his arm into the back of Ginnivan’s head while in a pack just before three-quarter time. 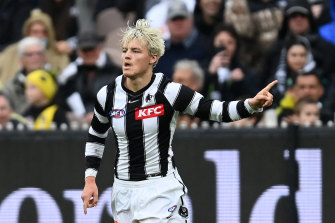 Jack Ginnivan celebrates a goal at the MCG.Credit:Getty Images

That dyed hair made the target stand out with the incident occurring just minutes after Kamdyn McIntosh laid an old-fashioned coathanger on Ginnivan to give away a free kick and goal. Although quiet, Ginnivan kicked three goals to make the most of his chances.

A new cat in town: can Tiger Laurie bump Mbye from Maguire’s team?

Cripps ready for success in second phase of career