Collingwood’s win-loss record, according to football-department chief Graham Wright, may not be all that matters in Nathan Buckley’s hope of being reappointed as coach next season, but it’s hard not to think losses of the kind experienced against the Gold Coast Suns on Saturday could sink his bid.

The Magpies fell to their fifth-straight defeat, this time by 24 points in front of only 24,397 fans at the MCG, the first time the resurgent Suns blessed with significant young talent have beaten the Pies in Melbourne. 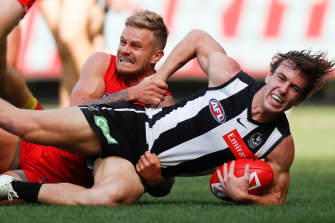 After a week of public debate about Buckley’s future and whether finals should be a focus this season, one thing is now clear: finals are definitely off the agenda. At 1-6, it would take something extraordinary for the battered Magpies to be alive come September.

That they had their fifth debutant of the season, Caleb Poulter – who showed good signs on a wing – and had five players with less than five matches surely meant the Magpies, privately at least, knew where they really stood. Regardless, Buckley, the club and the list-management department which still has major salary-cap issues can expect another week in the spotlight.

The restlessness of Magpie supporters was palpable in the goalless second term while the Suns booted four to take a 19-point lead into the main break. The visitors took charge at the clearances – the Magpies’ 22-7 dominance in the hit outs did not matter – and they finally opted to take a more direct route to goal, ensuring the Magpies’ defence was under enormous pressure.

Despite this, Buckley maintained All-Australian defender Darcy Moore up forward for the entire day. He finished with only five touches – the least amount on the ground – and this, too, will also be scrutinised for he may have been better off manning young Sun Josh Corbett who had 11 marks and booted four goals.

Then came a frustrating third term when the Magpies were dominant around the ground when Scott Pendlebury, Steele Sidebottom and Brodie Grundy lifted but they could not finish this work on the scoreboard. The Pies booted the opening two goals but let that slip when emerging Sun Ben King dribbled one through and veteran David Swallow pounced on a loose ball on the edge of the goal square. When clearance king Hugh Greenwood converted, the Suns again had the upper hand, something they maintained in the final term when the Pies were expected to challenge. 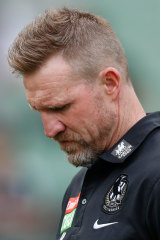 The hard-running Touk Miller, Brandon Ellis, Jack Bowes and Greenwood were instrumental in the win at a time returning Magpie Jordan De Goey, back from concussion, lacked zip, botched a set shot from 25m out in front and, at times, appeared even uninterested. His future also remains a talking point.

Brody Mihocek is one of the more reliable, consistent players in the competition. “An old-fashioned footballer,” is often the line used when describing him. Well, there was nothing ‘old” about him in the first term when he had 10 disposals – what typically is his match average. This included both of the Magpies’ goals, the first after a fine pass from Sidebottom, the second also from a set shot. He finished with a career-high 24 touches and booted four goals.

Izak Rankine is one of those must-watch forwards when he is in form and had a fine battle with Isaac Quaynor. He submitted a season-best performance in the surprise win over the Swans last week and delivered something special in the first against the Magpies when he pounced on a stray Pendlebury handball in the forward pocket and snapped successfully off his left foot. This was only the Suns’ 15th match at the MCG since 2011, their fourth win here and was Rankine’s first in his 19th overall senior match.

King of the kids

The Suns were determined to hold possession with short passes until early in the second term but this created more trouble than it was worth. It also made the contest hard to watch. But when they did take the game on good things happened. Jack Lukosius, playing behind the ball, won possession through the middle and drilled it long to King, who marked and converted from 15m out in the second term. King was also involved in the next goal, when his strong work at ground level led to a Noah Anderson snap, and the Suns were away. The emergence of the King twins shapes as one of the great storylines of the next decade.

Another stadium delay, another State of Origin decider at SCG

Brown to stay with Eels after inking three-year $2.1 million deal