An impressive first half from Majak Daw showed the 28-year-old is on track to make a round one return in defence for the Kangaroos as he slowly builds towards his first AFL game since a breakthrough 2018 season.

Daw was everywhere in the intra-club at Arden Street as he repeatedly repelled attacks in a battle against promising forward Nick Larkey. The Kangaroos need Daw in good form as they have several key players under injury clouds leading into the Marsh Community Series. 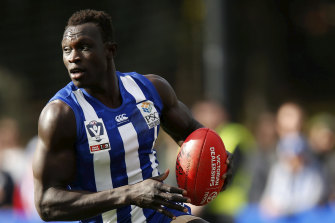 The extent of key forward Ben Brown's calf injury remains uncertain however a worst case scenario could have him doubt for the Kangaroos' opening round clash against St Kilda.

North Melbourne expects to know more in coming days about how long Brown will miss while skipper Jack Ziebell and running wingman Jared Polec are also coming back from interrupted pre-seasons.

Key defender Robbie Tarrant will resume running next week after suffering a foot injury while Aaron Hall left the ground early with what appeared to be a back issue. Mason Wood was taken out of the game after experiencing soreness.

Defender Jasper Pittard said Daw has been impressive and benefited from the back six's cohesion.

"He has just been building nicely during the whole pre-season," Pittard said. "It was really good to see him doing what he does best."

Pittard said the club had been cautious with Daw after injury sidelined him last season and he was managed from week to week.

"He pretty much trains on Monday and Friday and then we keep him pretty quiet in the middle part of the week," Pittard said. "It was good to see him step up. As a whole the backs group has really lifted this pre-season so that just makes everyone's jobs a bit easier." 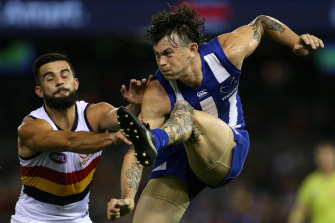 Jasper Pittard, right, was impressed with what he saw from teammates at the intra-club. Credit:AAP

Larkey played well in the second half after moving off Daw to finish with four goals while Ben Cunnington and Tarryn Thomas impressed as goalkicking midfielders.

Thomas was explosive, with Pittard saying the 19-year-old had quickly learned to do the little things required to be a team player, impressing everyone with his desire to help out in defence.

"The sky is the limit for Tarryn," Pittard said. "He is super composed, makes great decisions and he is quick and strong over it so we are lucky to have him."

Cunnington showed his class around goals, pushing forward at times to mark on the lead or kick a snap goal. Pittard said the veteran had worked hard to improve his fitness during the pre-season.

"He is as fit as I have seen him … he was challenged about his fitness and it is a scary prospect," Pittard said. "He will predominantly be inside because that is where we want him but it is nice to know we can chuck him forward."