Manly’s premiership chances have been dealt a savage blow with a “devastated” Tom Trbojevic tearing a hamstring which is likely to keep him on the sidelines until at least round four.

The Sea Eagles confirmed their superstar fullback had suffered a grade two tear to his right hamstring, unrelated to his chronic problems with his left leg in the last two seasons. 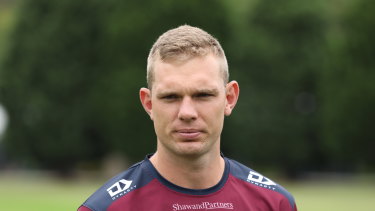 “I’m devastated by what’s happened,” Trbojevic said in a statement. “I will be working hard with the rehab team to get the hamstring right.”

Manly said the injury was the result of an “innocuous incident”.

Only late last year Trbojevic, 24, and Manly teammate Kieran Foran spent a week in Melbourne working with a specialist to help prevent further hamstring problems which have curtailed one of the best talents in the game.

Trbojevic ruled himself out of last year’s State of Origin series with a shoulder injury, having been restricted to just 19 NRL games in the past two years.

He was unlikely to play in Sunday’s trial match against the Wests Tigers even before his latest setback, which will worry coach Des Hasler given Manly are due to play the Roosters, Rabbitohs, Dragons and Panthers in the opening four weeks of the season.

Trbojevic is due to front the media on Monday afternoon.