I can’t remember a pre-season when I’ve been so keen for the footy to start. And what a game to kick off the season: Melbourne versus South Sydney at AAMI Park.

Both these sides will finish in the top four. This might even be an early preview of the grand final, that’s how highly I rate them. 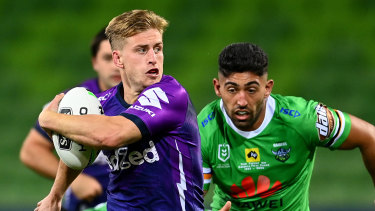 How the Storm can win

Coach Craig Bellamy has never lost a round-one match. Why? Because his sides are so well-prepared. They’re rock-hard fit because no team endures a tougher pre-season than Melbourne.

He also simplifies their jobs, giving players small things to do and, if they do that, they’re near impossible to beat.

He encourages effort areas and has different stats that measure these effort areas. It means his players are always on notice.

AAMI Park at this time of year can be slippery, so their defence will be so hard to break down.

Playing against Melbourne feels like you’re playing an octopus: their arms and legs are everywhere. They smother and suffocate you and won’t let you go.

I also think they’ll have a plan for Rabbitohs fullback Latrell Mitchell.

They will kick early and isolate him, chasing hard and squeezing him up and taking all the petrol out of his tank.

How the Rabbitohs can win

Souths coach Wayne Bennett prepares his teams differently to Bellamy, his former understudy at Brisbane all those years ago. He prefers them a little underdone and, as the season goes on, they get their match fitness before peaking late in the year. 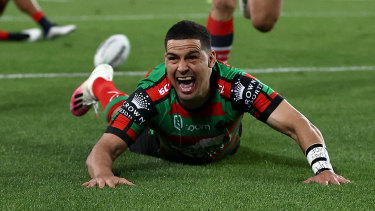 Cody Walker and Latrell Mitchell give the Rabbitohs X-factor.Credit:Getty

Souths start this season as the best attacking side in the competition. They’ve got the best spine, which has mostly played together for a long time now, and they complement each other.

They’re confident and then they have the X-factor of five-eighth Cody Walker and Mitchell playing together.

They’ve got strike on both sides of the field. Few can find a team out on short-side plays on the left like Walker. There’s an art to playing short sides and he does it better than anyone.

So that’s the big test for Storm recruit Reimis Smith, who will play at right centre. His decision making in defence to stop Walker will be critical.

It’s not just down the left. In the Charity Shield, they came down the right side and all of them combined: Adam Reynolds played to Walker, Walker played to Mitchell. They’re dynamite.

Then you’ve got Damien Cook playing out of dummy half; he’s lightning quick and always a threat.

Souths have have a tough, hard-working and mobile pack, which has only been enhanced by the addition of Jai Arrow from the Gold Coast. With a quicker ruck this year, he’s going to be a great buy.

Late last year, Cameron Munster was asked on my brother Matthew’s radio show, Morning Glory, on SEN what goes on in his head when he plays footy.

“It’s like that monkey banging two plates together,” Munster replied.

That sums up the Storm five-eighth. He just plays. There is no fear, no safety net.

For mine, he’s the best player in the game. He’s certainly my favourite player to watch.

If the Storm get a quick play-the-ball in the middle of the field, they simply have to fire the ball his way and let him do his thing.

Everyone knows what’s coming: he’ll carry the ball in his left hand, then go left-foot step, left-foot step, right-hand fend before slipping through. Doesn’t matter how much homework you do on him, you can’t stop it.

The play that sticks out for me, which defines Munster, was Origin III last year when he grubbered on halfway on an early play, regathered and then kicked it across the field to the right for an incredible try.

He did that, in the biggest game of the season, in the Origin decider with everything on the line.

He has no fear because, like the monkey smashing two plates together, he doesn’t overthink things.

Walker will give the ball to Jacob Host, who runs in between Jahrome Hughes and Felise Kaufusi, meaning the half and back-rower will be at marker on the next play.

That means the Storm will adjust their defensive line, having a front-rower as the first defender, and then Reimis Smith at centre.

Walker and Mitchell will be tucked away behind the ruck. Walker will appear, sucking in the first defender, then have Dane Gagai running the angle on the inside of Smith to suck him in.

Mitchell will come down the outside and play a two-on-one with Alex Johnston.

Souths have never won in Melbourne in the 18 times they’ve played there.

It will be a tight game but the Storm’s defence will get them home, especially around the ruck.

Just not cricket: Knights hammer Roosters A with plenty in reserve