Despite being the poster boy for the AFL’s colossal pay cuts last year, Carlton star Jack Martin remains grateful for what he has and is at peace with his contract situation despite his salary taking a “massive hit” last year.

Martin also says the Blues are “desperate” to end their eight-year finals drought, having learned plenty from a string of near-misses in 2020, with Martin set to tag-team through the midfield and forward line this year alongside high-priced off-season recruit Zac Williams. 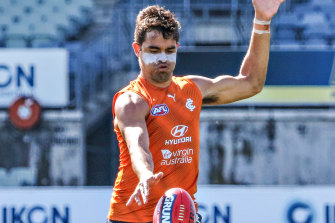 Martin joined the Blues from Gold Coast at the end of 2019 in a heavily front-ended deal in part designed to price out rival clubs from recruiting him in the pre-season draft after Carlton and the Suns were unable to reach a trade in October of that year.

Little was he to know that AFL player payments would be slashed last year as a result of the financial hit of the coronavirus.

Martin was therefore disproportionately affected, losing in the vicinity of $300,000 last year. While the AFL and players’ association initiated a special fund for players like Martin whose 2020 salary was substantially above their annual salary, Martin confirmed he had still been a significant financial loser from COVID-19.

But the talented forward/midfielder, 26, said he was not overly stressed about money and was comfortable with how the situation ended.

“Been in discussions with my manager and the PA, and the AFL. That’s all been taken care of, we’re pretty happy,” Martin said.

What is driving West Australian Martin, instead, is a desire to play an AFL final, something he has never done and something the Blues haven’t done since 2013, the year before he entered the league.

“I’m desperate. And I think everyone is. Obviously Blues haven’t played finals for a long time. Obviously that’s what we play footy for but we know it’s a long season and it’s going to take hard work. We’re willing to do that. We’re just looking forward to the challenge to be honest.

“We were in a lot of games up until the last quarter. I think we’ll get a massive experience out of those games, definitely learn a lot.”

On the personal front, Martin – who finished sixth in Carlton’s 2020 best and fairest – said his form had tailed off towards the back-end of the season, in part because of fitness concerns, which he said he had put behind him.

“Individually I thought I started the year pretty well and sort of dropped away. It’s just about consistency this year for me,” Martin said. 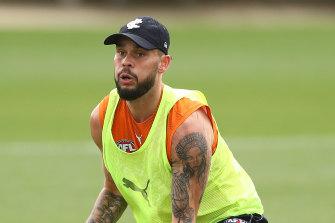 “I think my body last year at times just wasn’t allowing me to train at a high intensity. Just more of a focus about getting out on the track every week, being able to train, back it up. I think that’s the main focus this year.

Martin is keen to push more into the midfield this year, looking at a 50-50 split along with former Giants defender Williams, who will have a different role at Carlton.

“It’d probably be 50-50, depending on how the game’s going,” he said. “He’ll go forward, I’ll go midfield. We’re just building that little combination I guess.”

Martin said he had actually benefited from Cartlon’s extended stay in a Queensland hub last year, which allowed him to get to know his new teammates better. But he can’t wait to play in front of big crowds at the MCG, a lure to join the Blues and something he was denied last year because of the pandemic.

“He looks fitter, stronger,” Martin said of McKay, while adding that he expected Walsh to go to another level.

The Indigenous Martin also touched on the fallout of the recent independent report into racism at Collingwood.

“I’m not too political on this one. But it affects me, it affects everyone. We need to move together, forward as one. The day we can do that, is the day we’ll move forward as Australia I think,” he said.

Champions Cup prize money: How much will Leinster or Saracens get for winning?

Cronk opens up on Smith relationship