St George Illawarra will meet next Tuesday to discuss coach Paul McGregor's future as it grows increasingly likely he won't see out the final year of his deal.

The Dragons unanimously backed McGregor at a meeting following a winless opening four rounds of the season, but the coach's future is again on the agenda as the club looks set to miss the finals for a second consecutive year. 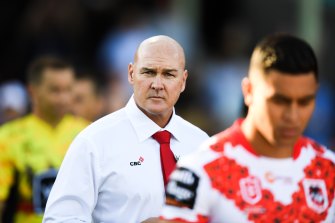 Paul McGregor’s job is back on the agenda at the Dragons.

The Dragons shook things up after a meeting sparked by the round four loss to Canterbury, shifting McGregor from attack coach to defensive coach and swapping assistant coach Shane Flanagan from defence to attack. There was some initial success but results in recent weeks have fallen away.

Dragons chief executive Ryan Webb confirmed the club would discuss McGregor's future next week, but said a decision had not been made.

"We'll speak about it at the regular board meeting that's coming up next Tuesday," Webb said.

"As we've just fallen out of finals contention, now is the appropriate time to talk about all things football. There's no discussion been had to this point. It is that first discussion that we will have at the board meeting next week.

"In round four, the board supported Paul unanimously and put in the necessary support systems around him to help the team improve. There was obviously a change in our fortunes over a period and [that] gave us a chance to make a run to the finals. As that's dropped off now, it's time to have another look and reassessment of where we are headed."