Carlton will have to face a formidable West Coast side without dangerous key forward Harry McKay.

McKay will miss the game because of a knee injury sustained in the Blues' last match, a loss to Hawthorn.

Carlton thought he would recover in time to face West Coast but he remains sore. 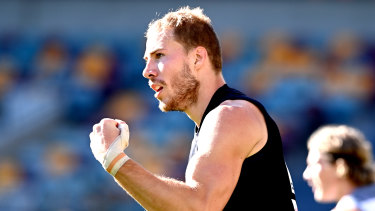 David Cunningham (calf) is also out of the side while Callum Moore has been dropped.

The Blues have named debutant Matthew Cottrell for the Eagles game as well as Tom De Koning and Zac Fisher, for his first game since round one.

West Coast will be without Harry Edwards (concussion) and Brayden Ainsworth, who has been dropped.

Underrated midfielder Jack Redden is back while Josh Rotham has been selected.

Meanwhile, Jack Silvagni will undergo surgery to release his iliotibial band, or ITB, on his knee.

Carlton head of football Brad Lloyd said surgery was the best option for Silvagni, who has only played in round one, three and four this year.

"This is a standard procedure that we're confident will aid Jack's recovery and we expect him to miss between four to six weeks."

The Eagles have been in commanding touch of late while the Blues will be out to bounce back from their disappointing loss to Hawthorn.

Minister ‘gutted’ at Queensland missing out on NRL grand final