Essendon and Greater Western Sydney have welcomed back crucial players for their match on Friday night, with Conor McKenna and Callan Ward both returning.

Ward has not played since round six following a knee injury while McKenna has been missing since round eight. 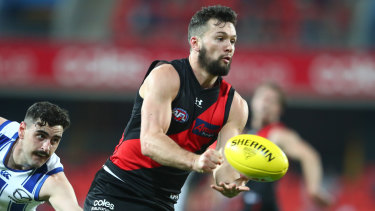 Essendon defender Conor McKenna is back to face the Giants. Credit:Getty Images

McKenna injured his hand in mid-July which came on the back of his multiple stints in quarantine because of overseas travel and over coronavirus fears.

Shane Mumford returns alongside Ward and the Giants have also handed a debut to midfielder Xavier O'Halloran.

Tagger Matt de Boer and star Toby Greene are both out with injured hamstrings and ruckman Sam Jacobs has been managed.

With Bellchambers being rested it means Bombers second gamer Sam Draper will have to back up his debut by managing the ruck duties mostly to himself.

GWS sit just inside the eight while an Essendon win could see them enter the finals spots, off the back of a disappointing loss to Brisbane Lions last round.

Super League quiz: What can you recall about the 2020 season so far?