State of Origin might be driven by hate but, in an act of rare co-operation, the states are coming together to provide rugby league with its Michael Jordan moment. And the man driving it is Today host Karl Stefanovic.

For the past few months, Stefanovic has been working on the concept of a behind-the-scenes documentary featuring the Origin teams. Late last week, with the support of NSW Rugby League chairman George Peponis and his Queensland counterpart, Bruce Hatcher, a deal was struck for the project to go ahead. 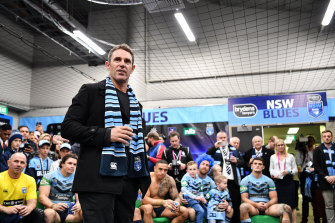 Brad Fittler in the NSW sheds during the 2018 State of Origin series.Credit:NRL Photos

Streaming company Stan – which is owned by Nine Entertainment Co, owners of this masthead – has backed the concept and it will be shot with the blessing of both states. In 1997, a documentary crew followed Jordan and the Chicago Bulls as they went for their sixth NBA title in eight seasons. The result, The Last Dance, was one of the most watched and talked about sporting documentaries of all time.

“I don’t know who the Michael Jordan will be … Wayne Bennett or Brad Fittler … I do have to say that I am excited,” Stefanovic said. “The support of both NSW and Queensland is so important and I hope we can produce a product that is worthy of State of Origin – which is the best sporting product we have in this country.

"The idea is to be with the teams in this unique year where they are in a bubble and take rugby league fans to places they have not been. It’s a chance to see how the magic happens. It will be great for the sport and great for the fans and the sponsors.

"We have seen The Test on Amazon [about the Australian cricket team’s recovery from the ball-tampering scandal] and that was very good and now we can see this in league.’’

The way that Peter V’landys has backed the concept is just great … as has Andrew Abdo.

Stefanovic and Richard Weinberg are the executive producers and production house CJZ will be in charge of the project. CJZ is Australia’s largest locally owned production house and has Bondi Rescue, Gruen and countless other programs to its credit.

“The way that [ARL Commission chairman] Peter V’landys has backed the concept is just great … as has [chief executive] Andrew Abdo,’’ Stefanovic said. ‘‘They know the good that this can do for the game here and hopefully internationally as well.”

Some of my social media-savvy sources have sent me what looks likea significant development in the Joseph Suaalii story: he is no longer following the Rabbitohs on Instagram. The only club he follows is – wait for it – the Sydney Roosters; the club that definitely wants him.

The Roosters are playing down their interest. The tricolours claim Wests Tigers, and maybe even the Broncos, are his likely destinations if he doesn’t re-sign with Souths. The Roosters would have to clear salary cap room to sign him.

Angus Crichton’s name has been mentioned to rival clubs, but he would be prepared to stay for less after his deal expires. Suaalii already has a $600,000-a-year offer on the table from Souths for 2022 and beyond. So the Rabbits think that’s the minimum the schoolboy sensation will accept.

Souths have made it clear to me they are ready to release him next year to rugby or any other NRL team – just not the Roosters. The Bondi-based club will challenge that if it reaches that stage. Roosters boss Nick Politis doesn’t lose out in these situations too often.

It was fascinating to watch Suaalii go through his paces in a sprint session during the week under the watchful eye of sprint coach Roger Fabri. There is no question the kid has athletic ability, but at this point he does not have blistering speed. He was being watched by two networks’ TV cameras – and almost no attention was being paid to Manase Fainu and Bryce Cartwright – two
well-known NRL players. 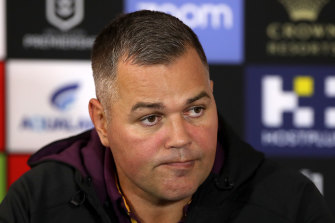 Anthony Seibold was the target of false online rumours while still at the Broncos.Credit:Getty

From day one we questioned the claims of Anthony Seibold’s lawyer, Dave Garrett, who said “big names” would be exposed for starting the online rumours about Seibold.

Despite an outstanding interview with Seibold on 60 Minutes last Sunday, no big names have been linked to the online campaign. The only person associated with the trolling was a man with tenuous connections to the NSWRL.

However, Seibold’s investigators found a person in that man’s phone was a central figure. We don’t know his identity, or whether he is a league figure, but he is named in the phone as “The Washed Up King”. This individual is considered to be central to the rumours.

Alyssa Healy was the player of the match in Australia’s massive World Cup victory at the MCG in March and she’s determined to carry that form into WBBL06 when the season starts in Sydney next weekend.

Sydney Sixers coach Ben Sawyer gave Healy last week off to recharge after the season’s first batch of internationals. The break gave her the chance to spend some time with husband Mitchell Starc before the pair head into different bubbles for the summer.

Starc will travel to Adelaide for the Sheffield Shield, while Healy will join players and support staff from all eight WBBL clubs in the Sydney Olympic Park ‘‘village’’ for the entire 59-game tournament.

While sporting franchises globally have been hit for an economic six by COVID-19, the impact of Australia’s World Cup success has had a flow-on effect for the Sixers, who today announce a partnership with interest free buy now, pay later service, humm. Participation numbers are on the increase too, with Eastern Suburbs reporting a 30 per cent increase for girl’s cricket. 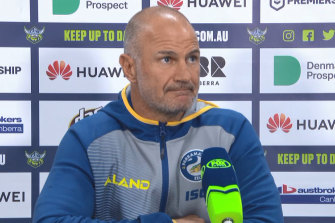 Brad Arthur is under pressure at the Eels despite leading them to within a whisker of a preliminary final.Credit:ninevms

Parramatta have a growing problem: the division between general manager of football Mark O’Neill and coach Brad Arthur.

In the days since the Eels went out of the finals in straight sets, losing 38-24 in dramatic fashion to Souths last weekend, Arthur has been under real pressure – somewhat unfairly, considering they were a Mitchell Moses penalty miss and a Damien Cook non-sin binning from potentially playing in a preliminary final this week.

The core of the problem is the division between O’Neill and the coach, but the cracks at the club are threatening to grow. The players and the football department are on one side; O’Neill is on the other, with the support of the club’s executive.

No one at the club denies the Arthur-O’Neill rift – just the level of tension between the pair.
O’Neill has been in his role for two years and, in fairness, the Eels have had considerable success in that time. But they now want a premiership and Arthur knows where the drive to change his approach is coming from.

There was a line that got under his skin this week. “The team is not going to improve by doing another three laps of the oval,” an Eels official told me.

The criticism of Arthur came at a sensitive time for the club as it dealt with the stunning positive drugs test for veteran centre Michael Jennings on the morning of last Saturday’s semi-final loss to the Rabbitohs. Jennings denies being a drug cheat and says he will fight to clear hisname.

The Eels think the next stage in their development will come from improving the team in a holistic sense. A major criticism of the Eels has been that they are fragile and get frazzled when the blowtorch is applied.

The club has done plenty of work in the area of mindfulness and mental strength. I had lengthy chats with Ryan Matterson this year about the work he did in that area and his approach has been adopted by other players.

Perhaps part of the issue here is that Arthur, while allowing this work to go on, wasn’t driving it. O’Neill is a big believer in courses and development. He is a disciple of a man named Shane McCurry, who has had success with Richmond in the AFL. McCurry is described as a “thought leader” and he clearly wants the Eels to be the Richmond Tigers of the NRL.

While Arthur is criticised for being too old-school and not taking on new ideas, O’Neill and the Eels football department are castigated throughout the NRL for being “too bureaucratic”. Their slow decision making and negotiating frustrates many. Managers say, along with Wests Tigers, they are the most cumbersome club to deal with.

Last year’s negotiations with club captain Clint Gutherson were a case in point. Rightfully, Gutherson felt disrespected and he has proved himself to be their best player. It was not how their leader deserved to be treated and every signing the club makes is like pulling teeth.

10/25/2020
We and our partners use cookies on this site to improve our service, perform analytics, personalize advertising, measure advertising performance, and remember website preferences.Ok