Claiming that he had been unusually agitated because of low blood sugar levels before the game was not enough to save Paddy McCartin from a five-match suspension at the VFL tribunal on Tuesday night.

Meanwhile Melbourne forward Bayley Fritsch is free to take on the Swans in the AFL this weekend after the AFL tribunal separately found him not guilty of striking North Melbourne’s Tom Powell on Sunday.

Seeking to revive his AFL career, McCartin will now miss almost one-third of the state league season, a huge blow to his chances of getting a second chance at the top level. 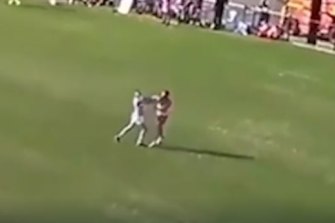 The clash was caught on camera.Credit:Fox Footy

The former No.1 draft pick pleaded guilty to intentionally striking Geelong’s Aaron Black during a reserves game at Sydney’s Tramway Oval on Saturday in an incident that left the Cat with a swollen jaw but no concussion.

McCartin, diagnosed with type 1 diabetes at the age of eight, told the tribunal that he had been unusually agitated in the lead-up to the game. He said that he headed to the bench shortly before the commencement of the match to check his blood sugar level, which was 3.8, considerably lower than usual. He therefore ingested a gel to normalise his blood sugar level.

The key forward told the tribunal that he was then involved in a push and shove with Black, alleging that Black sledged him by calling him “unfit.”

McCartin said this riled him up more than it would have ordinarily because of his blood sugar situation.

“I was more agitated than I normally would be out on a footy field, due to my blood sugars,” McCartin said.

McCartin claimed he was trying to punch Black in the chest to gain separation from the Cat but accidentally hit him in the jaw.

“I went to punch him in the chest and got him in the chin. I felt numb about it, I was about as stunned as he was,” McCartin said.

“I obviously didn’t mean to do that.”

McCartin sat out from football during 2020 as he recovered from a string of concussions which curtailed his career at St Kilda. He joined the Swans’ VFL side this season in a bid to earn a second AFL chance. His younger brother Tom plays for Sydney’s AFL team.

The ex-Saint said that because of his own history of head injuries he was worried about Black’s wellbeing.

McCartin said that once Black returned to the field following the incident “he came back on and I immediately said sorry” to which Black “used a few expletives and said a few other things.”

McCartin, who issued a public apology 30 minutes before the tribunal hearing on Tuesday, said he had also contacted Black to say sorry on Monday.

Adding that he was “quite ashamed” of his behaviour, McCartin said he would be visiting junior clubs to educate them about concussion.

A medical report from Geelong said Black was not expected to miss any training or matches.

A lawyer acting for the league had pushed for a six-week ban to send a clear message against such acts, although the Swans had pushed for a three-match penalty. Ultimately the tribunal opted for a penalty in between those two figures.

That Fritsch was cleared could present the Dees with further selection headaches given Sam Weideman’s strong run of form in the VFL.