NSW Deputy Premier John Barilaro has revealed the NRL's bold push for as many as four or five new 20,000-seat stadiums in Sydney has the backing of the state government, saying: "We're going back to basics".

In a development that all but guarantees this year's grand final will remain at ANZ Stadium, Barilaro on Monday said the Berejiklian government was "absolutely" supportive of the NRL's boutique stadia strategy, which proposes multiple "mini Bankwest stadiums" be delivered around the city over the next 10 years including a new venue at Liverpool. 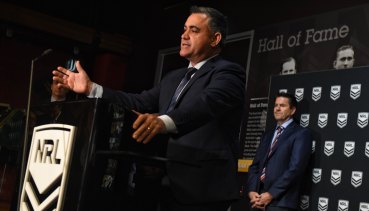 The NRL had sought a commitment from government to its vision of restoring tribalism via suburban venues in return for keeping the grand final in Sydney.

The code has a deal with the state government to play the decider in the city until 2042 but that was signed on the basis of ANZ Stadium being transformed into a rectangular ground along with the construction of a new stadiums at Parramatta and Moore Park.

The scrapping of the ANZ redevelopment means that deal is technically off the table but Barilaro was optimistic about a new memorandum of understanding being struck.

"I'm confident the grand final will be played at ANZ Stadium," he said as the NSW government and the NRL announced a game between New Zealand Warriors and Newcastle in Tamworth on August 29. 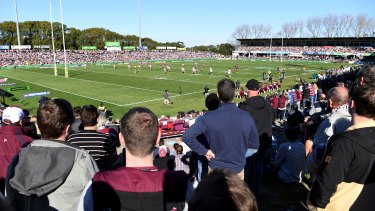 Manly’s home ground is in line for a rebuild.Credit:NRL Photos

"We've had a long-term agreement with the NRL and we'll work through those details. But I'm very confident."

ARL Commission chairman Peter V'landys said on Monday he could not comment on talks with government because they were commercial in confidence.

But he has previously made clear his desire to take the game back to the suburbs and his view that a range of new venues would be community assets, not simply football grounds.

Barilaro said the details of the government's backing were still being thrashed out.

"[The NRL] will be seeking some level of contribution from the state government. We'll also be hitting up the feds I suppose along the journey," Barilaro said.

"We're at the early stages of that conversation but absolutely there is an appetite for it."

He maintained, though, that Sydney's retention of the grand final was not contingent on the government splashing out immediately on suburban grounds.

"They are two separate things but they want to know where the government stands … what's the long-term vision," Barilaro said.

"Peter and the NRL, everyone has been working really well together. This has been a tough year. You could use that to leverage each other but we're not."