Brett Morris is more than confident he can do Latrell Mitchell's old jersey some serious justice and welcomed the challenge of shifting positions in the later part of his career.

Morris seems the logical choice to replace Billy Smith who ruptured his ACL at training and was in the box-seat to replace South Sydney recruit Mitchell at left centre. 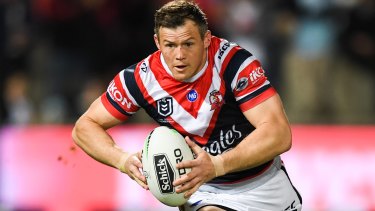 Smith collided with teammate Joey Manu and sensationally had no idea about the severity of his injury until after Monday's field session.

Two-time premiership-winning winger Morris is yet to discuss moving to centre with coach Trent Robinson, but backed himself to shine in the role if required.

Morris' teammates also had no issues with the 33-year-old succeeding, just as he did on debut for the club when he scored a hat-trick in last year's World Club Challenge. 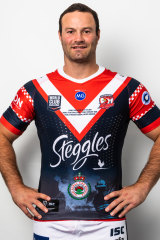 By moving Morris the Roosters still have the option of bringing Englishman Ryan Hall or Matt Ikuvalu on to the wing.

There has been speculation the Bondi club are keen to lure Josh Addo-Carr from Melbourne, but the NSW and Kangaroos flyer is involved in a messy split from his management, while the Storm are not prepared to cut 'the Fox' loose without a suitable replacement.

Cronulla centre Bronson Xerri is close with Roosters recruit Kyle Flanagan, a centre with immense promise and at a club that needs to shed an outside back, but is contracted until the end of 2021 and cannot be approached.

"One thing I've always been comfortable with whilst playing is my defence," said Morris, as he modelled a special Roosters jersey that will be worn in the World Club Challenge against St Helens on February 22, and raise money for the NSW RFS. "I feel I understand my game quite well and I know how to break teams down with the structures they throw at me.

"I suppose as you get older you enjoy being out of comfort zone. I haven't played a lot of centre, but you have to nail it week in, week out, and being an older player you enjoy that [fresh challenge] a lot more rather than being in a position you're comfortable in."

Morris spent years playing outside his representative twin brother Josh and a host of other top-liners, and said that would help with any potential transition.

"I have been able to pick [other centres] brains and work out their mentality around certain defences and field positions and what they like to do," Morris said. "'Robbo' is an extremely smart coach, we have a great defensive coach in 'Fitzy' [Craig Fitzgibbon] as well, so between those two there's enough knowledge to get you through."

"He'd fill in there no dramas whatsoever," Cordner said of Morris. "[As for Billy] we didn't know the extent of the injury until after the session. We saw him go down, but it wasn't your typical ACL injury. He got up, walked around, finished the session, then went for scans which showed he had torn his ACL."

Cordner said the loss of Mitchell would impact on any team, but they had the depth and coach and belief.

The Roosters jerseys will be auctioned after the World Club Challenge with all proceeds donated to the NSW RFS. Firefighters were expected to be at Wednesday's SCG promotion, however were forced to cancel at the last minute because of the latest outbreak of bushfires.

Adelaide coach Pyke’s job on the line as review begins