Eels coach Brad Arthur has confirmed Mitchell Moses will make his return for the blockbuster Easter Monday clash against Wests Tigers, which is on course to draw the biggest NRL crowd since the grand final.

As of last Monday, stadiums in NSW are allowed to operate at 100 per cent capacity. Some 30,000 fans are expected at Stadium Australia for the public holiday clash. 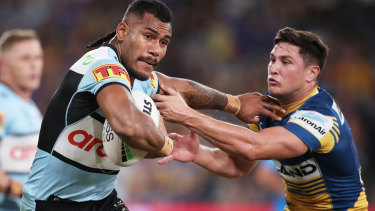 Mitchell Moses suffered a head knock in the Eels’ round-three match against Cronulla.Credit:Getty

“There is no reason down the track why that won’t be there in front of him,” Maguire said on Sunday. “One thing I’ve said about Dave is his diligence and understanding of the game. Every time he gets into meetings now he’s starting to add a lot more and I think that’s part of becoming more of a senior player.”

On Wednesday, the Tigers announced Moses Mbye had been granted permission to discuss his playing future with other clubs from the 2022 NRL season. Mbye was co-captain in 2020 alongside Benji Marshall, but James Tamou was given the armband after moving from Penrith in the off-season.

“I think Moses wanted to just get that out there,” Maguire said. “That’s part of a player’s career, that they have to look to the future.”

The highest attendance so far this year has been the Broncos vs Eels match in round one, when 28,313 came through the gates at Suncorp Stadium.

“It’s always a good one playing on the Monday throughout the Easter period. You get the crowd coming from the Easter Show and I’m looking forward to plenty of fans. It’s a big one,” Maguire said.

“It’s always special. You’re playing big games every week, but this one, we need to make sure we build on what we did last week. We talk about our fans quite a bit. They’re a big part of the club.”

Meanwhile, the Titans will head home on Easter Monday after relocating to Sydney on a charter flight last week due to the COVID-19 outbreak in Brisbane and Byron Bay.

The Titans have been staying in Homebush and played their round four home game against the Raiders at Kogarah. They were cleared by the NRL on Sunday to return to the Gold Coast.

Titans chief executive Steve Mitchell said the team was “thrilled” to be returning home to play in front of a home crowd on Saturday against the Knights at Cbus Super Stadium.

“I want to thank our Members, fans and corporate partners for their support over the last week and we look forward to making you proud with a strong performance next week,” he said.

Player feedback should ring alarms for NRL about new rules