New South Wales State of Origin coach Brad Fittler has suggested it's time for the NRL to abandon the Gold Coast and move the Titans to Brisbane.

Coach Garth Brennan was sacked on Sunday, a day before rugby league legend Mal Meninga presents his findings of a mid-season review to the Titans' board on Monday. 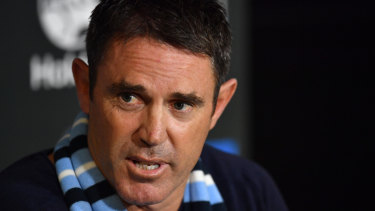 Meninga was appointed in May to undertake the evaluation as part of his role as the club's head of performance and culture.

Despite being less than two years into the role, Brennan is an early victim of the review, which is expected to bring about wide-ranging changes to the Titans' operations.

Fittler, however, suggested removing Brennan is akin to putting a band-aid over a mortal wound and it may be time to consider the viability of an NRL team on the Gold Coast.

The NRL has outlined intentions to expand the competition by 2023 with a second Brisbane team a major part of the league's plan.

Fittler has argued the solution could simply be to shift the Titans north.

"Why wouldn't the Gold Coast be the second Brisbane team?" he told the Nine Network.

"There's 4000 people turn up to watch them each week. Let's not call it a success.

"They had a couple of good years at the start, without a doubt, and they played semi-finals but it's far from a success."

Since entering the competition in 2007, the Titans have made the top eight just three times.

The Gold Coast has long been a sporting graveyard in Australia with several national franchises struggling to survive in the nation's sixth-biggest city.

A former national rugby league team which played under three nicknames – the Giants, Seagulls and Chargers – for a decade from 1988 was shut down in 1998 as part of the fallout from the Super League war.

Basketball, soccer and rugby union teams have been and gone while the AFL's Suns are also struggling for relevance having failed to reach the finals since joining that competition in 2011.

Nice Bombers more concerned about being liked than being ruthless