Out-of-form Carlton veteran Marc Murphy is set to get another chance to recapture his form in the Blues’ must-win match against Fremantle on Easter Sunday after a slow start to the season playing as a high half forward.

Injuries to Jack Martin and Zac Fisher have made it difficult for the Blues to consider wholesale changes for the game at Marvel Stadium with sources saying the club would back their former skipper in against the Dockers. 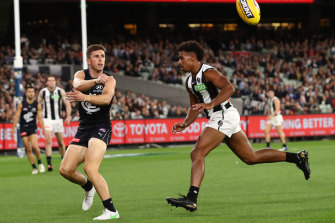 Murphy’s ball use and poise is considered a potential asset for Carlton forward of centre however his defensive pressure was below par against Collingwood after a reasonable showing against the Tigers in round one and there have been calls for David Teague to make a statement at selection.

He has played the past 29 games, kicking the winning goal in Perth against Fremantle in the second match of that run in 2019, and signed a one-year deal for 2021.

The Blues’ coach is focused on those selected playing a contested brand of football with Luke Parks to make his debut because the coach is confident the rookie selection will compete while forward Jack Silvagni is a chance to return from injury and veteran forward Eddie Betts is also in contention to play his first game for the season.

He also expects Patrick Cripps to be close to his best after being down on form in the first two matches while carrying an injury.

“Patrick is a great leader for our football club and the hard thing right now is he’s not playing the way he wants to play,” Teague said.

“He has had an injury and he’s been a bit sore, but when he gets to game day he’s been putting his hand up to play. He’s not executing to the level he would love to execute at.

“I have absolutely belief that it’ll happen this weekend: I’ll back him in. He’s someone that I’d love to run out alongside and tuck in behind him as captain of a football club.”

If the 34-year-old Betts plays on Sunday there is a chance Carlton’s team could have five players aged 30 and above against Fremantle as they look to kick start the next phase of their rebuild amidst an injury list that includes Martin, Fisher, Charlie Curnow, Caleb Marchbank and Nic Newman.

Not only are Carlton desperate for a win to keep them in the finals hunt, they face a Fremantle outfit that has been equally disrupted by injury.

Although dynamic forward Michael Walters is a chance to return, the Dockers will be without dual Brownlow medallist Nathan Fyfe after he was concussed against the Giants.

Depleted Dragons still confident of mixing it with NRL’s best

‘Of course it becomes harder’: Pay running out of time to save job