Greater Western Sydney have placed the ball firmly in the court of gun duo Josh Kelly and Stephen Coniglio as they prepare for the inevitable onslaught of offers from rival clubs in the coming months.

Both players, pivotal in the club’s quest for a historic first premiership and named as vice-captains for this season, have been given the option of signing long- or short-term deals, with the Giants more confident than ever before that the pair will remain at the club.

The move from the club has been part of a plan months, even years in the making, with the Giants allowing several highly paid and highly valued players – including most recently Dylan Shiel, Rory Lobb and young gun Will Setterfield – to be traded to other clubs.

It means the Giants have the salary-cap room to properly accommodate the signatures of arguably the club’s best two players. 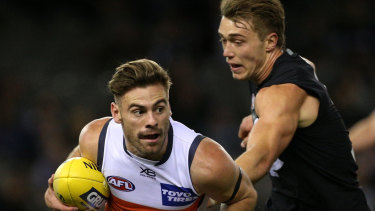 Stephen Coniglio is one of the key players the Giants are trying to keep out of the clutches of cashed-up clubs.Credit:AAP

Greater Western Sydney will be all too aware about the looming offers for both players, with the cashed-up Carlton, Hawthorn, North Melbourne and St Kilda having already shown interest.

The Kangaroos and the Saints have both publicly gone after Kelly before and have shown no signs of giving up on the chase, despite the Roos recently conceding privately they believed the Victorian would stay in Sydney.

The Age understands that Carlton and Hawthorn, meantime, are closely monitoring the movements of Coniglio, the West Australian, who will become a restricted free agent at the end of the season.

Fremantle refuse to be left out of the conversation, while West Coast have a tighter salary cap and have already prioritised another play at Geelong midfielder Tim Kelly.

O’Meara is leaving manager Colin Young – who delivered him the trade to Hawthorn from the Gold Coast – and is moving to the stable of Tom Petroro, who also manages Coniglio.

Legendary Hawks coach Alastair Clarkson made no secret prior to last year’s trade period that he desired another A-grade midfielder on his list.

That stance is unlikely to have changed, given the uncertainty surrounding Tom Scully’s injury status and the fact that Chad Wingard has been more of a forward than full-time midfielder.

The Age understands both Carlton and Hawthorn have comfortable space in their salary cap, and the Hawks will only have more by the upcoming trade period with several older players potentially retiring, such as Jarryd Roughead and Shaun Burgoyne.

Kelly, also a No. 2 pick overall but two years later than Coniglio in 2013, is out of contract but unlike Coniglio is not a free agent, meaning any club wanting to attain his services would have to trade for him.

The best and fairest and All-Australian signed a two-year extension in 2017 after being offered a nine-year, $10 million dollar deal to join North Melbourne.

Both players could demand over $1 million a season on the open market.

While it’s unclear what financial package they have been offered to stay at the Giants, the AFL’s youngest club has been clearing the decks for a signficant period of time to prepare for a time like this.

Kelly and Coniglio would almost certainly be offered more money by rival clubs, but both players remain extremely happy at GWS and were last month named vice-captains behind co-captains Phil Davis and Callan Ward, who will lead the club for the eighth straight season.

Richmond’s class shines through as game goes to script