Promising Geelong midfielder Quinton Narkle is set to remain with the Cats in 2021 as the club makes list decisions after a lucrative trade period in which it landed free agents Jeremy Cameron and Isaac Smith, and traded in veteran Shaun Higgins and two extra future second-round picks.

The trade for Cameron also saw them give up three first-round draft picks to the Giants – selections 13, 15 and 20 – while they also traded out Nakia Cockatoo and Lachie Fogarty. 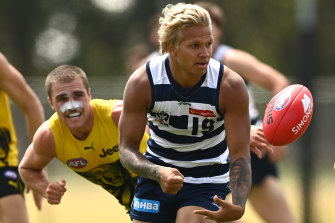 Geelong will enter 2021 as one of the premiership favourites with Cameron, Higgins and Smith joining the team that lost the 2020 grand final to Richmond.

They have locked in Coleman medallist Tom Hawkins, and recently announced that they had re-signed Zach Tuohy, Brandan Parfitt and Rhys Stanley, with Tom Stewart extending his contract until the end of 2024. Lachie Henderson is also expected to continue in 2021 after rebooting his career in the back half of the season.

Harry Taylor and Gary Ablett retired with Ablett requiring a shoulder operation this week after being injured in the grand final loss.

Meanwhile, Taylor Duryea has re-signed with the Western Bulldogs for another season after an injury-interrupted 2020.

Fremantle veteran David Mundy also re-signed with the Dockers after they cleared salary cap space when they traded Jesse Hogan to the Giants.