Nathan Brown has emerged as the clear favourite to take over as head coach of the Warriors – less than two months after he ruled himself out of the race.

The former Knights coach is firming to be Stephen Kearney's replacement after interim boss Todd Payten earlier this week sensationally confirmed he had turned down the job. 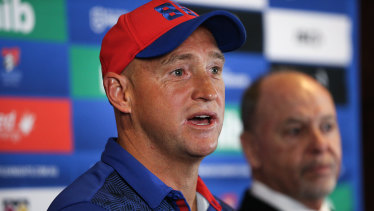 Nathan Brown is firming to take over as head coach of the Warriors.Credit:Marina Neil

Former Panthers boss Anthony Griffin was still in the Warriors mix earlier this week, but has now yielded ground to Brown.

It could be part of a massive shake-up at the club with the Warriors also circling Phil Gould, who on Thursday confirmed he is in discussions with the club about turning around their fortunes.

The Warriors have been stranded in Australia since early May to ensure the competition could be rebooted and managed an upset win over the Tigers last week.

"I've been getting a lot of messages lately. A lot of people checking in but as I keep saying to everyone I'm pretty lucky," Warriors captain Roger Tuivasa-Sheck said.

"I've got a strong woman back home and she's got good support around her. She's raising the babies really well and I'm just happy to be here doing my job to help her and the kids back home."

The Warriors will play the Sea Eagles at Lottoland on Friday night.

How Majak Daw made it back

Ponga rates Latrell a similar athlete to himself. Here’s why fullback switch will work