Carlton's mid-season recruit Josh Deluca is hopeful his attributes will help with the Blues' lack of midfield depth, and he's ready to make an impact this season.

The 23-year-old former Fremantle Docker joins the Blues with a grade one hamstring tear that's nine days old, but he's confident he'll be ready to play in two weeks, admitting it will almost certainly be in the VFL. 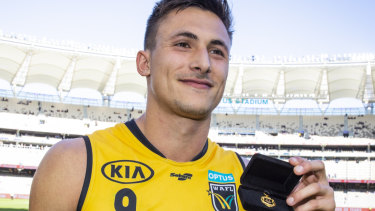 Josh Deluca has starred in the WAFL since leaving Fremantle.Credit:AAP

But with the Blues struggling to find midfield grunt outside of Patrick Cripps, Deluca believes his skill set can help fill a hole at the club.

"I’ve been playing midfield and forward, I like to think I’m an explosive and contested player and I pride my game on my tackling and my ball use.

"I run hard and I think I have a bit of speed to inject into the team as well."

He went back to the WAFL and has dominated, winning four of the last five premierships withn two different sides, including a best-on-ground performance in last year's grand final.

Deluca believes he is a better player now than he was when he was first on an AFL list.

"I think definitely, coming into the system now is a totally different mindset.

"I’m a lot more mature as a person and a player … it just gives me the opportunity to put my best foot forward from day one rather than learning the ropes.

"I’ve really put a stronger focus on the things that they brought up and that I needed to work on, which were my kicking and decision-making.

"I think I’ve implemented some things that have really helped me with those … it’s made me a better player for it."

Deluca will wear No.47, last worn at Carlton by Darren Hulme in his first season of 1998, before he changed to No.27.

‘I don’t respect you’: Mitchell opens up on Origin stoush

Worsfold leaps to defence of Fantasia