Collingwood maintains they have welcomed Nathan Buckley’s declaration that he wants to coach next season but club bosses insist there will be no change to the contractual timeline on a day the Magpies had their finals’ hopes all but ended.

The Magpies fell to a fifth-straight defeat, this time a stinging 24-point loss to the resurgent Gold Coast Suns at the MCG, which will ensure more debate as to whether Buckley should be awarded a contract extension. 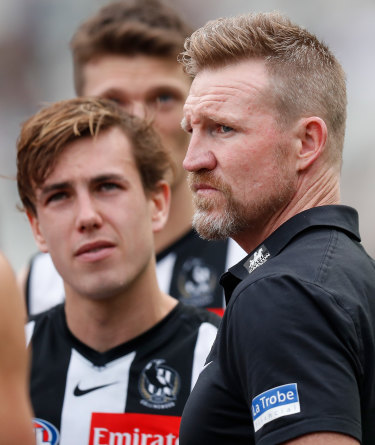 The financial concern in a season of turmoil for the Magpies was that only 24,397 supporters showed up – the lowest crowd they have had at the MCG for five years, excluding last year’s COVID-19 impacted season. This indicated that Magpie members and supporters may have tired of the club’s messaging which had been that finals remained on the agenda despite blooding five debutants this season after a tumultuous off-season.

Buckley has declared he wants to go on next year but football-department chief Graham Wright maintained on Saturday discussions will not begin until after the mid-season bye.

Speaking pre-match, Wright said wins were not the be-all and end-all in determining whether Buckley was reappointed. But he said the timeline on discussions would remain as is, that being later in the season, as agreed upon in February. He conceded the Magpies had the option of making a decision earlier which would end potentially unsettling speculation but added: “It does but is that the right thing? We all said let’s revisit that in the back half of the year,” he said on Triple M.

As the Magpies begin to deal with a 1-6 win-loss record – their worst start to a season since 2005 and with a match against lowly North Melbourne next Saturday – Buckley dismissed claims speculation over his future was a distraction for the players. He said he was happy with the contract timeline and dismissed suggestions there was a “disconnect” between he and the club. 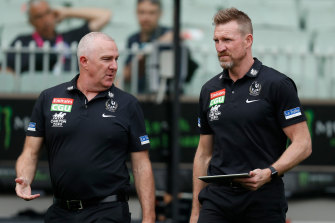 “No and the commentary around there being a disconnect around the football club in regards to my tenure … go back and listen the interviews, (president) Mark Korda has spoken, (chief executive) Mark Anderson has spoken, and I have spoken, Wrighty in some shape or form, we are really clear on the timelines. You have already got the answers to your questions on that,” he said.

“Everyone has expectations. We expected to perform better today and we expected to win. We knew that we were coming up against a side that was playing some pretty good footy. I think the general expectation on us has been a lot greater than our capacity. That doesn’t mean we don’t want to be doing better. I am disappointed.“

The Magpies’ list has changed considerably this season, in part because of an ugly off-season which saw Adam Treloar and Jaidyn Stephenson leave acrimoniously, but Buckley said he had not attempted to “sugar coat” any issue or at what level the playing list was rated.

“I believe I am pretty open and transparent about where we are at … I don’t think I sugar coat things, I am not sweeping things under the carpet,” he said.

“We expect to be better performing better and that expectation should be there from our supporters and people that love the club. I think there is an unrealistic expectation and clearly there is a heavy focus on the club itself.“

Anderson said he was pleased Buckley had declared he wanted to coach for at least an 11th season.

The immediate issue is that the the Magpies won the clearances and dominated possession at times against the Suns but too often squandered opportunities, booting 7.13, and again were unable to capitalise on Brodie Grundy’s dominance in the hit outs (37).

The Magpies left Darcy Moore forward all afternoon and he had a game-low five disposals when the All-Australian defender could have been better served manning up young Sun Josh Corbett who booted four goals. AFL great Wayne Carey maintained Darcy should return to his position of strength but Buckley suggested the move would remain.

“The question about Darcy will be part of a whole heap of questions we ask ourselves pretty much every week on how are we going to take the next steps,” he said.

“He is playing in a role he hasn’t played in for a long time. He didn’t have a good day … but we are still finding stuff out. Darcy and his position on the field is the least of our issues on the field at the moment.“

Jordan De Goey’s future also continues to be a talking point on a day he returned from concussion but had little impact with his 16 touches, including botching a set shot from 25m.

“We all looked like we lacked a bit of zip today, outside of that third quarter when we found some energy and our work rate lifted,” Buckley said.

Skipper Scott Pendlebury, who had 26 disposals in a fine performance, said that Buckley had his support but admitted the team had a “bit of a chemistry issue”.

In a year of tumult, debate over Buckley’s future comes as Korda settles into the presidency although there is still support for Jeff Browne, the former AFL lawyer and deal maker, to launch a bid.