Western Bulldogs skipper Marcus Bontempelli says there is no timeline on settling on a new contract with his club, but talks are positive.

One of the biggest stars in the game, Bontempelli will be out of contract at season’s end as an unrestricted free agent. 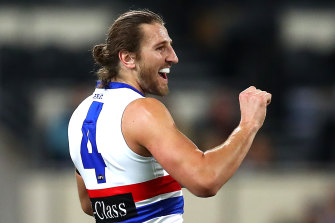 Marcus Bontempelli will be a free agent at season’s end.Credit:Getty Images

Bulldogs chief executive Ameet Bains said in April that the club was less inclined to do long-term deals for players when discussing Bontempelli’s contract situation.

Bontempelli told reporters on Tuesday morning he was comfortable with where discussions were at.

“The dialogue’s been really good between my manager and the club,” Bontempelli said.

“There’s no real timeline probably on it but as I sort of see it and and I think as the club sees it things are progressing pretty well, a lot can change in time.

“Hopefully sooner rather than later but these things take time, it is different for everyone but I think the good thing is they’re progressing well.”

In April, Bains told SEN: “We’ve been less inclined to go really, really long with our deals for both the sake of the club and the player as well.

“As long as there’s the right sort of reference points or trigger points to come back and talk about the contractual position, it doesn’t necessarily require a long deal in one hit, it can be done along the way.”

Asked if the length of the contract was a detail still being worked out, Bontempelli responded: “There’s probably a couple things that are part of it, obviously the dialogue has been good, the discussions are open and it’s just sort of working through it in the right time.

“I think the most important thing is that the chats are good and they’re going well.”

Hold the outrage: NRL wildcard could prove the boost your team needs