The NRL have moved to clarify Ivan Cleary's involvement in a half-time tunnel incident with referee Ashley Klein, interviewing the Panthers coach as they edge closer to finalising an investigation.

After assembling statements from a range of people on Monday, the NRL spoke to Cleary on Tuesday – almost 48 hours after the alleged incident – to hear his version of events. 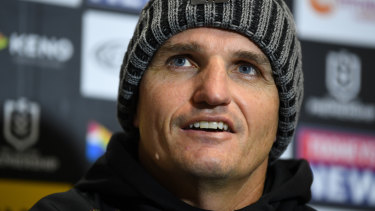 Penrith coach Ivan Cleary insists there was nothing untoward about his half-time exchange with referee Ashley Klein on Sunday.Credit:AAP

Cleary conceded in his post-match press conference he breached NRL rules by talking to Klein as players and officials headed up the tunnel of Canberra’s 30-18 win on Sunday, but insisted his remarks were "nothing untoward".

It is understood the Panthers are adamant the coach didn't swear when talking to Klein, who claims he was unaware of what was directed at him.

Given there is no audio available from the incident, the NRL has taken its time compiling a detailed analysis of the incident before deciding whether Cleary should be sanctioned.

Cleary had originally headed into the tunnel to ask captain James Tamou to raise an issue with Klein, who had already walked from the field in animated discussion with the prop.

It is unclear when the NRL will hand down their findings into the Cleary probe.

The coach was in charge at Panthers training on Tuesday as they look to complete a remarkable turnaround and make the finals, having crashed to a 2-8 start to the season.

Cleary's Penrith players remained in the dark about the tunnel incident on Tuesday as they prepare to face the struggling Bulldogs at Bankwest Stadium on Saturday.

There were a few [contentious calls], but that's footy and you've got to keep going with it.

It came moments after Penrith captain James Tamou and stand-in James Maloney, who assumes the role when Tamou is on the bench, argued with Klein both before and after the half-time siren.

"I have no idea what happened," Panthers fullback Dylan Edwards said. "Ivan is not the type of fella to do that, but he went into bat for us. I didn't really pay too much attention. You're always going to have a chat to ref and they're both captains, it's just part of footy."

Said back-rower Liam Martin: "I had no idea about it until after the game when someone mentioned it. There were a few [contentious calls], but that's footy and you've got to keep going with it.

"They [Tamou and Maloney] are our captains, they're our voice pretty much. We bring it to the Jimmys and they take it to the refs pretty much on behalf of us. In some respects [the play-the-ball] was slower, but it wasn't too bad."

Watene-Zelezniak and Edwards had waged a battle to wear the Penrith No.1 before the Panthers granted permission for the former to explore his options at other clubs, which led to an 18-month deal at Belmore.

"You can do as much as video as you want on Dal, but we played alongside him," Edwards said. "He's still developing as a football player and adding strings to his bow.

"We always knew where we stood and it was a matter of whoever got the job would do the best job for the team. We joked about it a couple of times, but there was nothing untoward.

"Dal has been around the boys for a long time and good mates with a lot of us, myself included. He left on really good terms."

Three NRL clubs at risk of being axed