The NRL and the Knights have reacted angrily to a discreet Rugby Australia approach to Kalyn Ponga, describing a phone call last year from Wallabies coach Michael Cheika as "inappropriate" and "extremely disappointing".

The future of the 21-year-old whiz has again been thrust into the spotlight after News Corp reported Cheika last year made an informal approach to the Newcastle star to gauge his interest in switching codes in the future. Ponga excelled in the 15-a-side game as a teen. 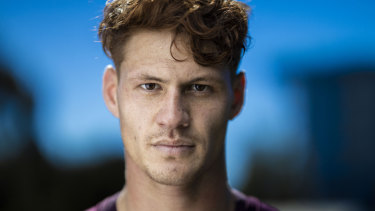 Ponga's Knights deal is not due to expire until the end of 2021. He has an option in his favour to extend that contract for a further season.

But so highly regarded is Ponga within rugby league circles, the NRL and Knights issued a hands-off warning for one of the code's most marketable stars.

"It's not surprising that rugby union have identified Kalyn as a talent they wish to get their hands on,” Knights chief executive Phil Gardner said.

"What does come as a surprise is that an official from their code would personally phone our talent despite the fact he has several seasons left to run on his contract.

"It is inappropriate for any contact to be made from rugby union – or anyone else for that matter – and it is extremely disappointing. The reality is Kalyn is under contract for another two-and-a-half years with the option for a third year.

"Kalyn is a superb talent and quality person. He is a player we see being part of the Knights fabric for years to come. I can assure not only Knights supporters, but fans of the game, we will be doing everything in our power to sign Kalyn long-term when the time is right."

NRL chief executive Todd Greenberg also expressed his dismay with the conversation with Ponga, who starred in his first run-on start for Queensland in their game one State of Origin triumph over NSW.

"Kalyn is a wonderful talent and a fine ambassador for rugby league and the Knights, and it is not surprising that there would be interest in him at the appropriate time.

"The nature of this interest is certainly unorthodox. Kalyn has a significant period remaining on his contract and it would be disappointing to see any contact made to any player under these circumstances."

Ponga is unable to field formal offers from Newcastle's NRL rivals until November 1 next year.

He has previously hinted at chasing an All Blacks jersey given his New Zealand links, putting him on the radar of all Australian and New Zealand franchises.

"Kalyn is obviously an exceptional talent and he has a long-term contract in another code," a Rugby Australia spokesperson said. "Rugby Australia is always open to talk with talented athletes who are genuine in their interest in playing rugby."

Ponga's father Andrew has previously spoken of his family's desire for his son to honour his Newcastle deal and not rush into talks about an extension or code switch.