Jaeger O’Meara arrived at the Gold Coast to considerable fanfare, having been taken with pick one in the special mini-draft conducted at the end of 2011.

With an imposing physique, he couldn't help but make an instant impression. 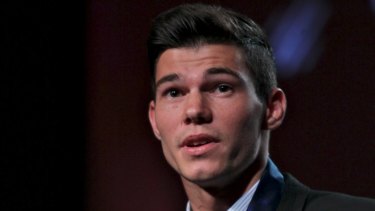 “His arms were the same size as they are now,” recalls former Gold Coast teammate Luke Russell, who remains a good friend of O’Meara’s.

O’Meara quickly trended skyward. By the middle of 2013, Essendon great Tim Watson suggested the young Sun could ultimately become the greatest midfielder to play the game.

Fast forward nearly six years, and O’Meara, though unlikely to become an all-time great, could well be considered in the top bracket of midfielders in the AFL.

He is on the seventh line of Brownlow Medal betting, recently signed a four-year contract extension, and last week had a career-high 42 disposals to help his side to a mighty comeback win over Carlton. 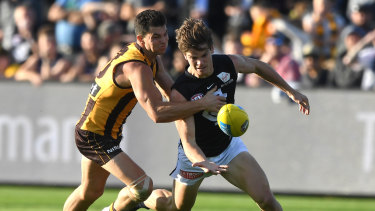 If you didn’t know what had happened in between, it would have all made perfect sense. But O’Meara’s start to 2019 belies the difficult journey he’s endured. In only his seventh season in the league, O’Meara has already had the best part of three years wiped out through injury, and moved clubs.

He is 25, but Hawthorn’s game against Melbourne on Saturday will be just his 77th AFL match. O’Meara played every match for the Suns across his first two seasons, taking out the Rising Star award in 2013, with finishes of third and fifth respectively in the Gold Coast best and fairest.

But 2014 hadn’t been straightforward for the youngster. He’d been plagued by knee tendonitis for much of the year, consigning him to a modified training program and leading to questions about his longevity. O’Meara travelled to London for surgery to repair the patella tendons in both of his knees.

That was a pretty dark day for everyone at the footy club.

The surgery was a success, and despite a gruelling recovery program O’Meara was poised to return to the AFL early in 2015. Then it happened. An opponent fell across his knee in a NEAFL practice match of April that year, leaving O’Meara with a dislocated knee cap and ruptured patella tendon.

The injury was described at the time by the Suns as “freakish” and unrelated to his previous issue. But the upshot was that O’Meara wouldn’t play a senior game for the next two seasons.

“I played in the game that he did his patella tendon,” Russell said.

“That was a pretty dark day for everyone at the footy club. Obviously getting to know Jaeger, and being pretty close with him, I was pretty upset.

“But the way he handled it was really impressive. The work he did behind the scenes, the demons that he would have fought, all the people that would have said ‘not many people can come back from this sort of injury.’ It was just a really dark time for him.” 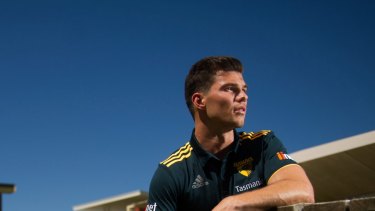 Then came O’Meara’s much-publicised move to Hawthorn at the end of 2016. At the time of his trade request, O’Meara’s management had cited O’Meara’s relationship with Hawthorn doctor Michael Makdissi as a significant reason for O’Meara picking the Hawks over several other Victorian suitor clubs. O’Meara and Makdissi had spent time together previously when O’Meara was part of the AFL/AIS academy.

Still, there were hiccups. O’Meara started 2017 well but ended up playing just six games. Again it was a knee wreaking havoc, although on this occasion the issue was bone stress.

But he got back to play the last two games of that season, managed 21 last year, and has featured in five of six to start 2019, stepping up to help fill the monumental void left by the injured Tom Mitchell.

O’Meara said before round one that he aimed to play every game this season. A sore hip put paid to that goal in round four, but against the Blues the player who looked like a once-in-a-generation talent in his teens showed he may very well still fulfil his promise.

Russell – perhaps best known for kicking the goal that gave the Suns their first AFL win in 2011 – is back in his native Tasmania these days after being delisted at the end of 2016. He remains in touch with O’Meara, and full of praise for his mate.

“He did so much work to get to where he is right now,” Russell said.

“But at the time, when he was struggling the most, you wouldn’t tell with him. He was just real professional, backed himself at training. He was always there for you personally as well, a pretty selfless person. Everything he did was perfect with regards to his rehab. He’s that type of person that was never going to let that get him down.

“It was pretty tough for him, his first year at Hawthorn, because it was obviously a new club and he wanted to get out on the park, but he was a bit restricted because of his knee. But I think Hawthorn have been great for him as well.

“I could tell there were times when he probably thought ‘I might not be able to get back to being the same’ in terms of the way his body is. But I think from a playing point, that didn’t bother him.”

Russell also suggested that O’Meara was at peace with the likelihood he would need to be managed carefully for the rest of his career.

“I think he’s learnt now that he probably won’t be able to train as much,” Russell said.

Brendan remembers meeting the teenage O’Meara for the first time.

“Typical dad. Rhi introduces him to me, shaking his hand and I go ‘Geez mate, you’re punching above your weight aren’t you?’” Joyce said.

“It was a bit of a joke, trying to break the ice. I’m not sure if he thought I was fair dinkum or not.”

While stressing he remains a peripheral influence in the star's life, Joyce soon became a fan of O’Meara, pointing to the Hawk’s dedication to his own family as a mark of O'Meara's character. 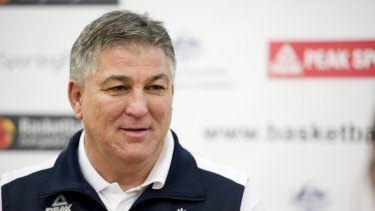 “And as a father, you’re hopeful your kids' partner are going to be quality people, forget about what they’ve achieved.

“Very dedicated, very professional. He’s definitely a student of the game. He watches other teams play.

“How he carries himself, and takes care of himself. He’s got leadership qualities.”

Rhiannon was herself a very talented basketballer who Brendan said could have made the WNBL had she not put her studies first. Rhiannon moved to Melbourne five years ago to pursue a career in advertising, later headhunted by outdoor advertising giant JCDecaux.

O’Meara is studying business, with Brendan noting the importance of having interests outside football.

“[Rhiannon has] been part of a sporting family, and she knows what the sacrifices are, and the focus people have to have,” Brendan said.

“They seem to do a good job of getting out and enjoying themselves, which is what all players should do.”