The Panthers on Tuesday morning shot down suggestions they were about to sign Pangai for the remaining five matches of the regular season and then the NRL finals.

“We investigated the possibility of signing him, but it wasn’t feasible,” Penrith chief executive Brian Fletcher told the Herald.

But when it became clear later in the day Fisher-Harris was set to miss at least three weeks because of quarantine issues, Penrith decided to have one last look at Pangai.

Fisher-Harris will play against the New Zealand Warriors on Saturday and then return to Sydney for the birth of his second child.

The club was locked in extensive talks with the NRL and Queensland Health later in the day, but were told Fisher-Harris would have to leave the club’s biosecurity bubble and then quarantine for a further two weeks once he did return to the Sunshine State. 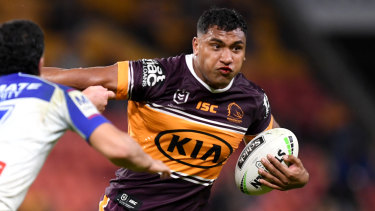 Broncos star Tevita Pangai jnr is heading to the Bulldogs in 2022, but could play out the current season with the Panthers.Credit:NRL Photos

“Our welfare officer Shane Elford has worked with the relevant authorities all day to help arrange for James Fisher-Harris to get back to NSW so he can be there with his partner for the birth of their second child,” Fletcher said late Tuesday.

Fletcher would not comment on Pangai, but the club will try to bring the matter to a head on Wednesday.

The NRL placed a value on Pangai based on the games remaining for the year rather than his annual worth, which worked out at around $130,000 – or roughly $25,000 a game.

Penrith have that money set aside for the final spot on their roster. They were initially going to fill the last spot on their 30-man roster by August 1 with a development player.

Should Pangai – and Brisbane – agree to the late-season release, he would will be free to join Penrith next Friday once the Panthers’ 14-day Queensland quarantine ends. He would be unavailable for Saturday week’s blockbuster against Melbourne.

Meanwhile, Fletcher has urged the NRL to move the Melbourne clash to the much larger Suncorp Stadium rather than play it at the Storm’s second home on the Sunshine Coast.

The Panthers and Storm staged one of the best games of the season back in round three – the last time Craig Bellamy’s men lost – and the two heavyweights are widely tipped to meet again in the grand final.

The Storm remain hopeful the COVID outbreak in Melbourne will be contained and they will be allowed to return home to AAMI Park for the Panthers game. They are prepared to wait as long as possible before making alternative arrangements. 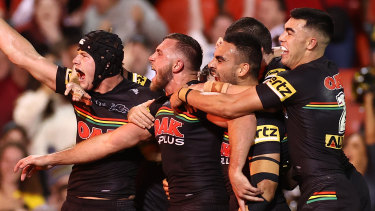 Penrith are pushing for Saturday week’s blockbuster against Melbourne to be at Suncorp Stadium.Credit:Getty

But in the event Melbourne are forced to remain north of the Tweed, Penrith want the game moved away from the Sunshine Coast region the premiers have called home for 12 months.

Fletcher said it was “only fair” Melbourne shift their home game to Brisbane since the Panthers will on Saturday be forced to take their own ‘home’ game against the Broncos to Suncorp Stadium, where they will be greeted by 30,000 opposition fans.

The NRL will confirm venues for the round 20 games as early as Wednesday. Towns in country Queensland, including Toowoomba and Mackay, have been discussed as venues for the coming weeks.

Because the NRL collects all the gate takings from games hosted by the 13 relocated clubs, the prospect of 50,000 fans at Suncorp, compared to 12,000 on the Sunshine Coast, for the Storm-Panthers match has huge financial appeal. 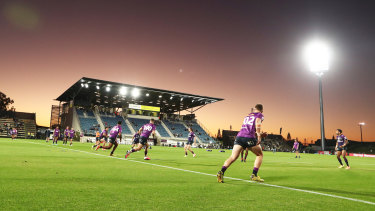 “If we have to pack up and leave the Sunshine Coast for Suncorp, it’s only fair Melbourne are made do the same thing for us next week,” Fletcher said.

“We’re on the Sunny Coast and it would have been easy to stay there this week. But we’re not. And I understand the NRL have done it from a revenue point of view because it’s the Broncos and they will get close to a full house on Saturday. They will go close to a sellout if they play at Suncorp next week.”

Storm football manager Frank Ponissi has kept an eye on the COVID numbers in Melbourne, with Premier Daniel Andrews extending their lockdown until next Tuesday after 13 new cases.

“Whilst it may be challenging under the current circumstances, our priority is to play at AAMI Park on Saturday week in front of our fans,” Ponissi said. “Until it becomes a definite ‘no’, that’s all we’re thinking about.”

How many fans will be allowed into AAMI Park and border exemptions will be big factors when it comes to the Storm being granted their wish.

Saint Billings battles on hurt in his free-agency year