Penrith asked to have Brent Naden play in a trial on Saturday night to help with his recovery and mental well-being after a tough 2020 and subsequent drugs ban. The club said their request was denied twice by the NRL.

Naden joined a few of his Panthers teammates in the stands at St Marys to watch a handful of first-graders, including Matt Burton, Spencer Leniu and Charlie Staines, play in a reserve-grade game against Mounties, the feeder club for the Bulldogs. 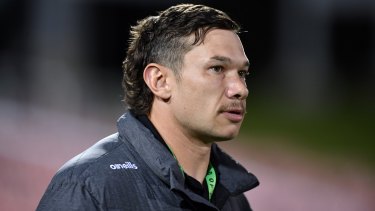 Penrith were denied twice by the NRL to have Brent Naden play in Saturday night’s trial.Credit:NRL Photos

Canterbury coach Trent Barrett was also at the game, but kept his distance from halves target Burton.

Naden was forced to miss one month of pre-season training for a drug ban, having tested positive to cocaine after October’s grand final, and wanted to make up some much-needed time on the field. Naden is also set to miss the first month of the season after Penrith coach Ivan Cleary chose to stand his player down for not upholding the team’s standards with his cocaine use.

Under the NRL’s rules, only players who played 12 NRL games or less were allowed take part in the trials this weekend. The rule was designed to help balance players’ workload.

But after Parramatta were given special exemption to have three players rushed in for their own trial against St George Illawarra on Thursday night, Penrith asked the NRL again about Naden, only to be denied. 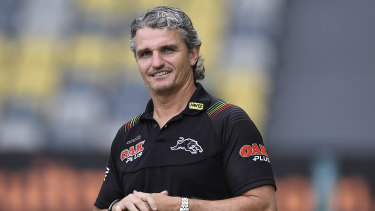 Penrith coach Ivan Cleary said it was a shame because Naden was desperate to play some football and if anybody knew what was right for him, it was the club.

“I don’t want to sound like we’re whinging about this, but I feel like we know a lot about our players,” Cleary said. “I understand the NRL have made it a blanket rule when it comes to not wanting players playing too much [pre-season] football, but it would have been really good for him tonight.

“They’re footy players, they want to play footy. In the end, he has another week’s pre-season now, so he’d prefer to play.

“He’ll play next weekend [against Parramatta], I don’t know where, but he’s trying to make up some ground, and doing it on the field is the only way to do that.”

As well as the club-imposed stand down, Naden was fined $5000 by the NRL for a biosecurity breach when obtaining the drugs on the eve of last year’s decider.

He has undergone counselling and the need to play football and be around teammates is an important way to assist with his eventual return.

Naden played 18 NRL games last year, which the governing body confirmed was the reason his involvment in the trial was blocked. Penrith won the trial 18-12.

The Panthers also requested Tyrone May get some game time under his belt, but he played 16 games last season and was also off-limits. 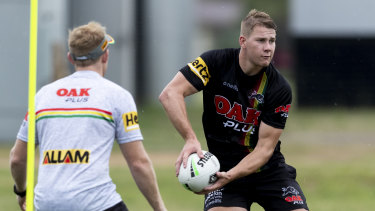 Meanwhile, Burton spent an hour at left centre and Cleary said he will play there against Parramatta next Saturday should Stephen Crichton fail to overcome a niggling ankle injury. The coach said Api Koroisau was the only other player who was a chance to skip the Eels hit-out.

Burton has made plenty of headlines with the Bulldogs determined to have the playmaker at their club before the start of this season.

Cleary has repeatedly said Burton will be staying put in his final year at the club, and reiterated “just go to the archives and look at what I’ve said”.

″He covers some key spots for us, including the halves – nothing has changed there,” Cleary said.

Burton told The Sun-Herald: “I’d like to play in the halves, that’s my preferred position, but I’m enjoying it at centre at the moment and I’m learning.

When pressed if he wanted to be at Penrith this season, Burton said: “Yeah, for sure. There’s been a lot of noise. I can only focus on working hard and doing my job.

“By the looks of it I’m here. I just want to play footy at the end of the day. I’d like to be in the starting team every week.”

SBW to fly back to NZ for birth of fourth child