North Melbourne coach David Noble expects premiership coach Paul Roos to be a great resource for him personally and the football club overall after the pair met at the club last Wednesday for the first time in 2021.

Roos was instrumental in convincing Noble to apply for the senior coaching position after Rhyce Shaw stood down for personal reasons, with the pair’s initial chats convincing the 53-year-old to return to coaching after a decade in football administration.

After returning to Melbourne through quarantine recently, Roos – who coached the Swans to the 2006 flag – is expected to lend his experience in an informal manner across the club throughout 2021. 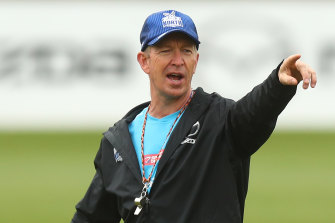 “I see Roosy as a great resource for me and our club,” Noble said.

“I have been around for a while but I am a first-year coach as [in] AFL, so I will be able to use him as a sounding board on areas, whether it is selection process, best and fairest, how I am feeling and [getting] balance of life [right].

“[Football manager] Brady [Rawlings] will be able to pick his brains, as [CEO] Ben Amarfio will and the board. He is a great resource to use and I am looking forward to working with him.”

The Kangaroos have adjusted their program slightly in 2021 to give players a set day off each week and set up a training routine designed to keep intensity high after Noble and Blakey developed the game style they will coach, which is likely to be based on fast footy off a strong contested base.

Noble, who will begin the year coaching from the bench, said the focus will be on constant improvement but they will not be using that as a shield from the ultimate goal, which is to compete for a premiership.

The Kangaroos, apart from replacing their coach, delisted 11 players last season before bringing in four recruits from other clubs and a selection of draft hopefuls led by midfielder Will Phillips, who was selected with pick three.

“It’s not quite a day at a time [but] I think when a new coach comes in with new ideas it takes a little while. Ultimately we want to chase success,” Noble said. “We want our fans to grow with the players.”

Freo exit rumours have ‘as much substance as Theranos’: Lyon