AFLW All-Australian Sarah Perkins is poised to play for Gold Coast in 2021.

Victorian Perkins, 27, has nominated Queensland as her region of choice in the state-based women's draft, which will be held on the night of October 6.

Key forward Perkins burst onto the scene in the first year of AFLW in 2017, booting four goals for Adelaide in the final round against Collingwood to get the Crows into a grand final against the Brisbane Lions, a match Adelaide ultimately won.

Perkins was named in the All-Australian team that year after kicking 11 majors for the season.

However she gradually fell out of favour with the Crows, missing selection for the 2019 grand final against Carlton and being delisted at the end of that season.

She was overlooked in last year's draft but joined Melbourne as a train-on player, eventually playing three matches for the injury-hit Demons as a top-up player. 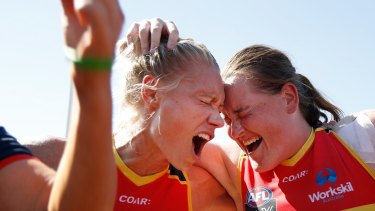 Perkins kicked a goal in the qualifying final win over Greater Western Sydney before the season was prematurely ended – without a premiership being awarded – because of the COVID-19 pandemic.

However as Perkins was only a top-up player for the Dees, she was not eligible to be re-signed by the club in last month’s sign and trade period.

She had to nominate for the draft instead. Despite being a Melbourne local, Perkins has instead chosen to nominate in the Queensland draft pool, meaning she is only eligible to be selected by the Suns and the Lions.

Sources close to the situation indicated that the Lions had not shown any interest in Perkins, and that is the Suns' interest which has enticed her to the Sunshine State.

The regional drafting system is a nod to the fact that AFLW players are semi-professional and it is therefore not feasible for some of them to play in a location away from where they live.

Meanwhile the AFL has confirmed to clubs that the VFLW season will shift to a February/March start in order to align with the AFLW season. Existing clubs have until the end of September to outline whether they intend to be part of the competition next year. Richmond have already opted out of fielding a team.

The AFL has told clubs there will be no license fee payable to participate in the women's state league next season.