Melbourne's second lockdown has been tough but having footy on the television is thankfully making it a lot more bearable.

North Melbourne and Melbourne tested that theory on Sunday night with a mostly humdrum display at the Adelaide Oval, although it did pass another few hours in a long few months. 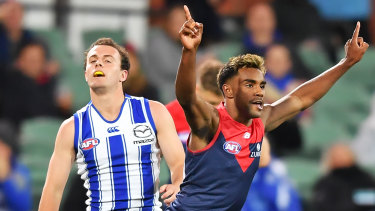 The most exciting element of the contest was Kysaiah Pickett. He just might be the player to stop Demons coach Simon Goodwin bemoaning Melbourne's poor midfield-to-forward connection at a lot of his press conferences.

The no.12 pick in the 2019 draft (Melbourne gave North Melbourne their 2020 first round pick to get the selection that secured Pickett) kicked a slick snap goal in the first quarter and applied good pressure across the game.

But it was his ball use in and around the centre square, wing and into the forward 50 that was hugely promising. He didn't have many touches yet there was a precision and assuredness about his delivery that's rarely been seen at Melbourne the past 10 years, and maybe even longer.

His Uncle Byron watching in the stands would have been proud of the way his nephew played. 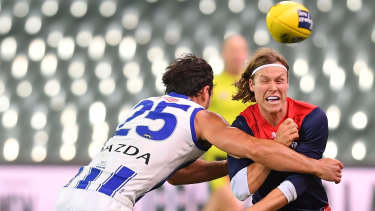 North Melbourne, as they always do, put in a determined effort. They hung around for the best part of three quarters with Sam Weideman's inaccuracy in the second term also a reason the Demons didn't put them to the sword earlier.

However the Demons found their accuracy in the third term through a Bayley Fritsch set shot from the boundary, a regulation set shot to Jake Melksham and then a typically bullocking Christian Petracca running goal from 50m out from a centre bounce.

There was also a welcome return to prominence from Angus Brayshaw, who seemed to spend more time in the midfield instead of on a wing or across a flank.

North Melbourne used the ball really badly, perhaps as badly as any side has this season.

They seemed to invent new ways of turning over the football. 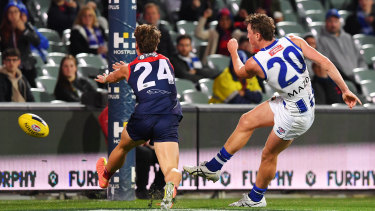 Kicking goals: Nick Larkey evades a spoil by Melbourne’s Sam Durdin to notch a major for the Kangaroos.Credit:Getty Images

At two stages in the second term – after grimly defending for most of that quarter – the Roos tried to run the ball through the middle with linking handballs but their indecision and panicked response returned the ball into Melbourne hands.

Nick Larkey was the positive among the negatives for the Kangaroos. He shone with four goals in the absence of Ben Brown.

There's been intrigue in the ruck-stakes everywhere this season given the high quality output of big men around the competition.

Todd Goldstein has been among the best as has Max Gawn.

Gawn (shoulder) didn't play on Sunday so no.3 pick from the 2019 draft Luke Jackson went up against Goldstein, with brief respite from Tom McDonald.

Melbourne selecting Jackson was curious given they have Gawn and Braydon Preuss, and some thought using their pick no.3 on a slick ball user would have been more to their needs.

Jackson has been promising as a forward in 2020 but as mostly a ruck against North he was dominated in the hitouts, but competed and created well in space against the much more accomplished Goldstein, and Majak Daw, who did a fair bit of tap work too.

Melbourne's forward line looked fine without Jackson too, with Weideman deep and McDonald leading up the ground.