Newcastle have lifted themselves off the bottom of the NRL ladder with a 16-6 victory over the Bulldogs to open Magic Round at Suncorp Stadium, with Kalyn Ponga influential and returning halfback Adam Clune clinching the two points with a late match-winner.

In an error-laden affair, the Knights finally applied a finishing move to the Bulldogs when Clune dashed over with five minutes to play, giving them their third win of the season and taking some immediate pressure off coach Adam O’Brien.

Unfortunately for his opposite number, Trent Barrett, there will be no such reprieve. There will be further questions as to whether he can get the Bulldogs moving in the right direction, with poor discipline and a lack of creativity and impetus in attack hampering their every move.

To top it off, they lost back-rower Corey Waddell midway through the second half when he was left crumpled on the field after he managed to get his head in the wrong place in the tackle, collecting a hip then bouncing hard onto the turf.

There was immediate concern from teammate Josh Addo-Carr but he was able to leave the field under his own steam before being ruled out with concussion.

Like magic, the torrential rain that had soaked Brisbane for days cleared an hour before kick-off. The smoke from the pre-game fireworks lingered and by the time that had dissipated, Ponga was helping himself a cheap penalty and an early two-point lead for the Knights. 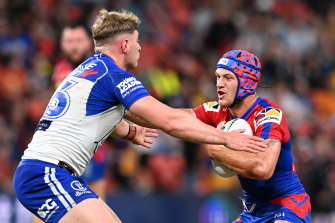 Kalyn Ponga was a handful for the Bulldogs on Friday night.Credit:Getty

The Newcastle fullback was bobbing up everywhere and enjoying the return of Clune, who gave the Knights some welcome shape in attack. That allowed Ponga to sneak a short-side raid and help set up Edrick Lee in the corner, even if the final pass from Bradman Best was slightly suspect.

The first errors of the night began to appear after some good early exchanges and there would ample to fill the stats sheet in the slippery conditions. The Knights were guilty on enough occasions to give the Bulldogs a glut of good ball and Addo-Carr made them pay with a sharp try in the corner.

Matt Burton was the engineer with a deft kick off his favoured left boot and the deficit was reduced to two. It prompted a period of territorial domination from the Bulldogs but another try would elude them, with a Burton penalty the only reward as they went to the half locked at 6-6.

Newcastle almost produced the perfect start to the second half, only to have a try called back for obstruction, while Ponga continued to be busy in an outfit that has been struggling for cohesion all year.

But Best made it count when he crossed in the 47th minute, giving his side a 10-6 lead that would last until the final minutes, when Clune dummied, then scurried over, for the knockout blow.

There are still mountains to move if Newcastle want to climb further up the ladder but Ponga’s form was encouraging. From a State of Origin perspective, there was more than enough evidence to suggest he will be a handful in a Maroons jumper.

The Bulldogs go back to square one. Again. They get another chance against a low-table team next week when they face the Tigers. That’s an opportunity they simply cannot let slip.