It was billed as a heavyweight stoush between the rising challenger and the defending champion – and it didn't disappoint.

Incumbent champion Richmond, on the back of a turbulent 24 hours , were leaning on the ropes early after absorbing plenty of early blows from rising challenger Port Adelaide.

The defending premiers refused to wave the white flag and continued to land plenty of counter-punches of their own, clawing, scrapping and chipping away at the Power. 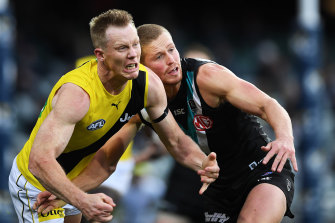 But the ladder-leaders had enough, holding the Tigers off in one of the games of the season.

It is too early to say if a changing of the guard has taken place but it isn't too early to brand the Power the genuine article. 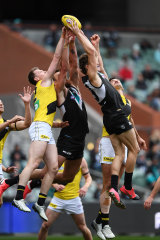 The Power’s Mitch Georgiades goes for the mark in round 11. Credit:Getty Images

Former captains Travis Boak and Ollie Wines – playing his 150th game – provided supreme strength at the contest, Robbie Gray and Zac Butters the finishing sizzle and big Pete Ladhams with the X-factor in attack to keep Richmond at bay.

Port's powerhouse Charlie Dixon could have virtually killed the contest early but when he missed two set-shot sitters – which could have opened up a 31-point buffer – Richmond were able to wriggle their way back.

The Tigers were again the recipients of a bit of luck in the second stanza, when Riewoldt converted a contentious free kick when it appeared Dustin Martin shoved Clurey, before Martin snapped truly after a poor Hartlett turnover.

Richmond closed to within nine points when Robbie Gray, strolling into the goal-square, was beaten by the half-time siren by a matter of seconds.

Port's advantage swelled to 22 points before the Tigers responded and stole a one-point, three-quarter-time lead thanks largely to Mabior Chol's back-to-back majors. 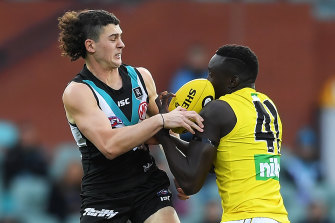 Gray goaled inside the first 16 seconds of the fourth to kickstart a run of three Port goals in five minutes to terminate Richmond's brave challenge.

Saturday's clash was a minute old when 202-centimetre Port big man Pete Ladhams got the ball rolling and set the tone for the high-quality, gripping contest that was to follow with a sensational opening goal.

On the opposite side of the ground to the scoreboard pocket, nicknamed "Eddie's Pocket" after Carlton's ex-Crows magician Eddie Betts, Ladhams received a sharp handball from Cam Sutcliffe and bent through a magnificent left-foot banana from the left-hand pocket of the River End.

Unable to comprehend what he had just done, Ladhams shared a laugh with direct opponent Dylan Grimes moments later. 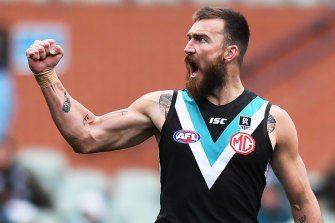 After conceding a free kick in the middle, in the fifth minute of the final term, a frustrated Martin shoved Tom Rockliff and copped a 50m penalty for his troubles.

Then, Jayden Short inexplicably made it a 100m penalty when he ran in front of Rockliff while running back to goal. Rockliff converted from point-blank range and Richmond's challenge was done.

McKenna and Ward back to boost Bombers and Giants