Payne Haas looks set to become the latest NRL star to pull out of the World Cup for family reasons.

Haas was omitted from the Prime Minister’s XIII team when it was released on Friday afternoon, and while Kangaroos officials were happy to give his problematic shoulder more time to recover, they are privately resigned to him skipping next month’s tournament altogether.

There were suggestions Haas was ready to switch his allegiance to Samoa, but Kangaroos coach Mal Meninga told the Herald if the Broncos and NSW front-rower did have a change of heart and play in the UK, it would be for Australia.

“I’ve had a conversation with Payne, he wants to play for Australia, but I also understand he has some family issues that may require his attention,” Meninga said.

“He just had a cleanout of his shoulder and wouldn’t have played in this PM’s game. I won’t push him to play. If there are personal problems there, there is no way I will pressure him.”

Haas’ mother was jailed just 48 hours before he played his final-round game against St George Illawarra. 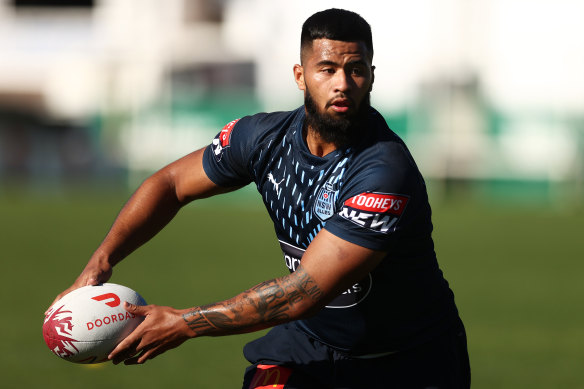 With Junior Paulo and Josh Papalii both committing to Samoa, Meninga said the Roos still had plenty of front-row depth, not to mention no shortage of quality No. 13s, including Penrith’s Isaah Yeo, South Sydney’s Cameron Murray and Manly’s Jake Trbojevic.

The underrated Josh King, who impressed in his first year at Melbourne, will start at lock forward for the PM’s XIII team to play against Papua New Guinea on Sunday week at Suncorp Stadium.

A number of players, including more than half a dozen who featured in this year’s Origin series, have made themselves unavailable for the green and golds, but Meninga has maintained all the way through “we need to look at the eligibility rules moving forward”.

Daly Cherry-Evans will be the starting halfback alongside Canterbury’s Matt Burton, with Ben Hunt to wear the No. 9 jersey.

Wests Tigers endured the worst season in their history but were somehow able to have fullback Daine Laurie and back-rower Luke Garner, who is bound for Penrith, and Jake Simpkin added to the 20-man squad.

Meninga said Roosters rookie Joseph Suaalii was another player overlooked for the Roos’ warm-up game, but remained part of his plans for the Cup, while fellow Roosters Sam Walker and Nat Butcher deserved their shot against the Kumuls.

Seibold speculation rife as he prepares to rejoin Broncos bubble