Wayne Bennett found it tough farewelling Greg Inglis at the start of the week – but Souths fans found it even harder sitting through the final half-hour against Canterbury.

Souths beat a spirited Canterbury 14-6 on Good Friday but did their best to throw the game away in a scoreless second half. 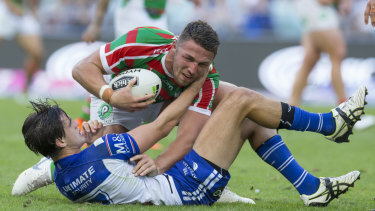 When Alex Johnston latched on to a brilliant Damien Cook grubber approaching the half-hour, Souths looked ready to cruise to their fifth victory in six starts.

They had the chance to go further in front right on half-time when Corey Allan found himself with plenty of time and room to catch an Adam Reynolds grubber and score.

But Liam Knight was pinged for impeding Lachlan Lewis in the lead-up. Despite completing at 90 per cent in the opening 40 minutes, Souths should have had more points on the board to show for.

Canterbury deserved credit for refusing to give up, especially Lewis who did his best to unsettle new skipper Sam Burgess.

They also played a large chunk of the game without fullback Nick Meaney, while Adam Elliott left the field late with what appeared to be a rib injury.

There was also little luck when Reimis Smith and Jeremy Marshall-King showed tremendous pace to reel in Allan, who almost went the length of the field to score, only for Smith to be penalised for getting in the way of Graham way back upfield.

Souths started the week with the emotional retirement of Inglis. While most of his teammates expected the inspirational skipper to pull the pin, it was still tough to take when he did announce his days were finished.

You have to wonder what sort of emotional toll that may have taken on some of the players.

Souths will have every chance to make it seven wins from eight when they head to the foot of the mountains against the struggling Panthers next Friday night. The Bulldogs host North Queensland on the same night.

It looked like being a Bad Friday at the start of the glorious sunny holiday afternoon for the Dogs when Cody Walker's cut-out pass to Campbell Graham made it 4-0 after just three minutes.

But the Bulldogs hung in and thought they had their own points when Kerrod Holland barrelled Dane Gagai out of the way and helped himself to a Jack Cogger grubber for a try. The bunker ruled Holland had taken out Gagai en route to the try line.

Canterbury eventually crossed through big Ofahiki Ogden, who barged over from close range.

Reynolds slotted a penalty goal, then when Cook's ripper right boot put Johnston over, the scoreboard attendant had nothing to do the remainder of the game.