While there was much to like for North Melbourne in their final warm-up clash, coach Brad Scott has a headache after Marley Williams became the latest defender to be in doubt for round one.

Williams, a rebounding half-back, hurt his calf in the opening term of Saturday's JLT Community Series clash against Port Adelaide in Alberton. He now faces a race against time to be fit to face Fremantle in Perth. 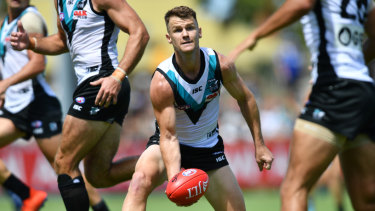 The Kangaroos could be without five of their primary six defenders from last season. Key defender Robbie Tarrant has a sore shoulder, Jamie Macmillan has a calf problem, Scott Thompson is suspended, Majak Daw's future remains unclear and now Williams could be sidelined.

The Roos, at times, struggled for composure in their defensive 50 in a 21-point loss to the Power . Ben McKay was guilty of poor kick ins, with the Kangaroos keen to opt for short passes despite the new rules promoting deep kicks into the middle of the ground.

Luke McDonald, a former defender, has gone forward this year so Scott may have to look at having recruit Aaron Hall or veteran Shaun Higgins spend time at half-back to help provide cohesion.

Ed Vickers-Willis' 2018 campaign ended when he crashed into a goal post but he moved well against the Power, completed a courageous mark running with the flight of the ball late in the second term, and the Roos will hope he can be an important cog.

Ruckman Todd Goldstein was rested but he will need to help out in defensive 50 against the Dockers, particularly if Tarrant does not return.

The Power also had concerns, when ruckman Paddy Ryder and midfielder Robbie Gray collided while chasing a loose ball. Ryder required assistance as he left the field. Club medical staff were quick to check for a depressed cheekbone, and he will be sent for scans.

Draftee Bailey Scott, Trent Dumont, Luke Davies-Uniacke and the emerging Paul Ahern are part of the new breed the Kangaroos need if they are to take the next step. Scott, the son of Robert, a former Cat and Kangaroo, knows how to find the ball and appears set to debut in round one. He was superb in the first half, in terms of taking the right option more often than not and then executing. He was also used across half back in the second half but finished with two goals.

Ahern, the former Giant who began to make an impression after injury with the Roos last year, had three goals from 10 touches in the first term. The first goal was from a set shot, the second after he intercepted a handball, and another when Jack Ziebell had pushed the ball forward, allowing Ahern to scoop it up and convert. He is fit and set to be a handful through the middle and across half forward. What Scott won't be happy about is that the Roos had only 24 tackles.

Travis Boak, having relinquished the Power captaincy, appears set to predominantly be used as a midfielder, having spent significant time at half-forward last year. That move didn't quite work as well as hoped, and Boak is back to where he made his name. Brad Ebert, who has filled several roles, has played as a deep forward through the practice matches where his big body will be handy. Tom Rockliff was dominant with 42 touches. The Power still seem to not know where Jack Watts should play, having used him at half-back last week and on a wing against the Kangaroos. Meanwhile, vice-captain Hamish Hartlett, who tore his ACL at training in April last year, hopes to return via the SANFL next weekend.

There were fears Roo Hall had seriously hurt his anterior cruciate ligament against St Kilda last week but there were no signs of the injury on Saturday. The knee was taped but he was smooth, converting a running goal from about 45m in the first term. It was some week for the former Sun, for he also had dealt with diarrhea and conjunctivitis.

Jared Polec, sans mouth guard, drilled a slick long goal from the boundary, heaping more frustration on Power supporters who did not want him to leave. While the almost carnival atmosphere of a practice match differs greatly to the season proper, Polec showed he will be able to handle anything that comes his way come an initial return to Adelaide Oval in round six.

Shaun Higgins wasn't the only Kangaroo baffled when he conceded back-to-back 50m penalties to Darcy Byrne-Jones. The first call was easy – Higgins had arrived at the marking contest late and knocked the Power youngster over. But that penalty was doubled when Byrne-Jones got up and ran towards the new mark, and Higgins followed but quickly trailed the Power player. As he trailed Byrne-Jones, he was deemed to have fallen into the 10m exclusion zone, meaning a second 50m penalty was imposed. Justin Westhoff found himself in a similar predicament in the final term, gifting a 100m penalty and goal to Tom Campbell. Sound confusing? It is.

Bring on round one. The Power travel to Melbourne to face the Demons at the MCG on a Saturday afternoon. The Kangaroos begin with a road trip to Perth to face the Dockers in the final game of the round.

Richmond brace for a ‘ding-dong battle’ with the Giants