Already battling with a long injury list, struggling St Kilda are likely to be without two of their senior core against Adelaide on Saturday night as Tim Membrey and Seb Ross head back to Melbourne for personal reasons.

Ross’ wife Marnie recently gave birth to twins while Membrey’s wife Emily is expecting, with both players leaving Sydney following the Saints’ loss to the Swans on Saturday. 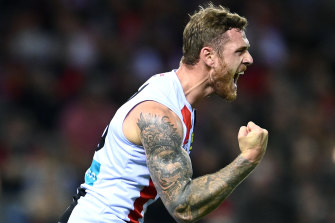 St Kilda are due to face Adelaide in Cairns on Saturday night before having a weekend off with their bye. The match could yet be held in Sydney if the Queensland government decides against giving the Saints an exemption to play, but as it stands Membrey and Ross are both likely to miss the date with the Crows.

“So, they’re not with us right now and I guess unlikely to join us for this game this week, wherever that might be. If it’s in Sydney it’s probably a bit easier, but if it’s Cairns it’s probably unlikely.

“They’ve both headed back for various reasons. Their intention is to be home this week and not be playing because they’ve got family matters to deal with and that’s supported by us.”

With Ross and Membrey both unlikely to play, the Saints’ list of unavailable players could leave them with few more than 22 fit men to select, following injuries on Saturday to Jarryn Geary (shoulder), Max King (back) and Mason Wood (hamstring).