A Hawthorn outfit ripe for the picking was duly plucked from its low-hanging branch, as St Kilda gained not only the four points but restored some of the huge chunks of percentage lost during a lamentable April.

Having played three stinkers in four weeks, the Saints had to respond strongly against an undermanned and rebuilding Hawks at Marvel Stadium on Saturday. That they did, recording their biggest win since round 6, 2017. 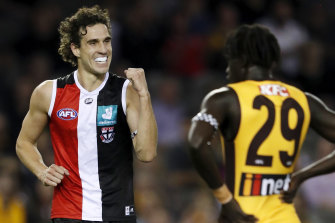 Having been competitive until this point of the season, Hawthorn played awfully. Without Jaeger O’Meara, the Hawks were slaughtered in the midfield and some of their ball use, when they managed to get their hands on the pill, was dire. Worryingly, it is still only the start of May. One wonders what sort of depths Hawthorn could plumb once winter arrives.

Hunter Clark hadn’t quite reached his best early in 2021, but there can be little doubting the young Saint’s quality. He has a sidestep to match it with the best, and out it came from his tool bag during the second term. Having smothered a Blake Hardwick kick, Clark gathered then made Changkuoth Jitath look silly with a sublime baulk before steadying to put through his first major.

It was a bit of an ugly first half for Hardwick, whose late bump on Jones during the second term is likely to be looked at by the match review officer. Hardwick met Jones high, although the Saint bounced back up, taking advantage of a 50-metre penalty to continue his magnificent start to the game. The Saints remonstrated after the hit, but it all cleared up quickly enough.

There are some passages of play that epitomise a player’s career. For Sam Frost, the microcosmic moment came midway through the first term. The former Giant and Demon’s defensive ability and speed have never been in question. His ball use, however, is another matter. Frost took a strong intercept mark at half-back, dashed away through the middle, and duly turned the ball straight over to the Saints. It was that sort of game for Frost, who was up against it given the tidal wave of ball heading into the Hawks’ defensive 50.

Danny Frawley’s show ‘Bounce’ to go on at Fox Footy