Wests Tigers need a unifying saviour, that much is evident in the fury of text messages from ex-players and fans after the club’s 38-0 defeat by wooden-spooners Canterbury in the final round of the regular season.

The joint-venture club, formed from a union of NSWRL foundation members Wests and Balmain, almost had its messiah a few years ago when Olympics supremo John Coates was asked about his interest in replacing the Tigers’ Barry O’Farrell, a former NSW premier, as chair.

Coates is a passionate Wests supporter who went to school at Homebush Boys High and regularly sneaked through the torn wire at Lidcombe Oval to watch the Magpies.

He possesses the silver tongue and iron hand necessary to unite all stakeholders at the troubled club but his Olympic responsibilities forced him to decline.

However, Fox Sports’ four-part Wild Wests: Tales From Tiger Town documentary and colleague Michael Chammas’ Crisis of Identity series in the Herald suggest Coates would have a better chance of creating peace in the Middle East.

Wests owns 90 per cent of the joint venture via its rich leagues club at Ashfield. It has appointed the very capable Balmain representative Danny Stapleton as chair of the football committee, which oversees the running of on-field operations. 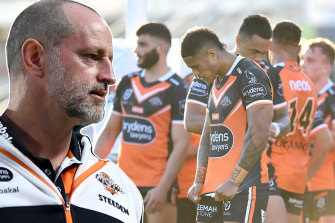 Michael Maguire and the Wests Tigers have missed out on the finals again.Credit:NRL Photos

The diverse geography of a club with a past at Leichhardt and Lidcombe, a present at a soon-to-be completed $60 million centre of excellence at Concord, and a future at Campbelltown, doesn’t lend itself to unity.

History is less of a problem, with a new generation knowing the club only as Wests Tigers and the separate junior representative teams badged accordingly.

The real need is a unifying leader. In the Fox documentary, coach Michael “Madge” Maguire came across like a contestant on the TV series Australian Survivor.

He appeared focused on self-justification. Whenever the team was ahead at half-time, according to Madge it was the result of what had been done at training in the preceding week. Well, that’s a given at most clubs.

Players have a radar for knowing when a coach is talking to them, or the camera.

Still, who could forgive him for his insecurity, given the long history in the dressing room of senior players acting like conspirators on a TV show, forming alliances to vote others off the island?

Maguire repeatedly proclaimed his belief in the players but there was little evidence of the reverse.

Where was captain James Tamou?

He was bought from Penrith to lead the team discussion, interact with other players, educate the younger forwards, yet the voice often heard was maligned halfback Luke Brooks.

The history of securing players at the club also reads like an episode of Survivor, with team managers blaming the chief executive for having unsigned contracts on his desk, while player managers take their clients to clubs whose coach is also a client. Where is the trust if a board is ambushed by a bloated player contract?

I don’t know club chair Lee Hagipantelis nor chief executive Justin Pascoe, other than one has smart clothes and the other some natty tattoos, but they do speak fluent corporate language.

There are some great people at Ashfield, such as Simon Cook, the chief executive of the leagues club.

Had Ashfield backed the Magpies in the ’70s, the club would never have lost the great players who ultimately had to be paid big money for their sacrifices.

The current team, however, consists of too many players with half-a-million-dollar incomes and 10-cent attitudes.

They can blame a disconnect with their passionate coach, snicker at club directors and argue who deserves the bulk of the blame, but if Wests Tigers want to end their 10-year nightmare of failing to make the play-offs, the players need to examine the inadequacies inside their own uniforms.

Tim Sheens, the new head of football performance and a multiple-premiership winning coach, will shortly arrive from England. Stapleton’s committee should allow him time to observe and recommend, rather than follow a media-dictated timetable designed to generate the headline of a sacked coach.

Sheens is not a messiah, but he’s as close to one as Wests Tigers will find in these troubled times.