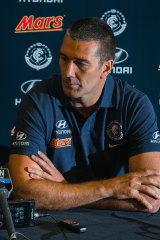 An aggrieved Stephen Silvagni delivered a parting swipe at Carlton's senior leadership when he attended a club board meeting last week.

The club legend and full-back of the century will end his tenure as list manager when he parts ways with the club, believed to be the end of next week.

His departure follows a season where his relationship with club boss Cain Liddle became strained.

Silvagni requested to attend a board meeting – events which he would rarely frequent – at the beginning of last week.

Sources close to the club told The Age that Silvagni directed some home truths to the board before leaving the meeting.

His departure is a significant moment for the club, given the prestige of the Silvagni name at Carlton. The 312-gamer is a two-time premiership player, a two-time best and fairest, a five-time All-Australian, a life member of the club and a hall of famer.

He also has two sons – Jack and Ben – currently on the list and is well liked by staff and players.

Silvagni was at work on Monday, helping new recruit Jack Martin settle in.

Several insiders at Carlton believe the recruitment of Martin is the cherry on top of Silvagni's overhaul of the list.

The list manager was criticised for failing to secure a deal with Gold Coast during the recent trade period, but Silvagni stuck to his guns and was able to sign him for free in the pre-season draft.

It's a messy situation for the club and its administration, with yet another senior figure leaving the club in acrimonious circumstances.

Silvagni has been a long-time friend of club president Mark LoGuidice  and the decision to part ways has tested the relationship.

At least one other board member – influential figure Craig Mathieson – has expressed to both Loguidice and Liddle his disappointment in the treatment of Silvagni.

The Blues will look externally to replace Silvagni.

Michael Agresta – who the Blues poached from Sydney – is held in high regard at the club but not yet ready to take on a larger role.

Silvagni has overseen a complete list transformation at Carlton.

There are only seven players at Carlton who were on the list when Silvagni took over in 2015.

Silvagni has been internally challenged on some of his recruits to the Blues, mainly the former GWS players that he brought into the Giants, such as Liam Sumner, Rhys Palmer and Jarrod Pickett.

But under Silvagni, the Blues have stockpiled an impressive amount of young talent.

Charlie Curnow, Harry McKay, Caleb Marchbank and Jacob Weitering look to be the team's bookends for the next decade, while the midfield is packed with class, including skipper Patrick Cripps, Sam Walsh, Sam Petrevski-Seton and Zac Fisher.

Carlton refused to comment when contacted by The Age.