London: Five players from English rugby league side Hull FC tested positive for COVID-19 following their Super League match against Salford Red Devils and have been quarantined, the club and the Rugby Football League (RFL) said in a statement on Tuesday.

It added that a sixth Hull FC player, who was not in the squad for Sunday's match, plus two members of the coaching staff had also tested positive. Another member of the team is being re-tested after an inconclusive result. 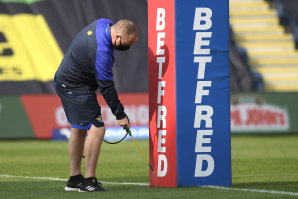 Six Hull FC players and two members of the team’s staff have tested positive for COVID-19 following a Super League fixture against Salford.Credit:Getty

Salford's routine weekly results had not yet been received.

Both teams have cancelled training sessions planned for Wednesday and all those who tested positive are now required to quarantine for 10 days in line with national guidance.

Former Sharks and Titans NRL halfback Albert Kelly is part of the Hull squad, while Salford's squad on the day featured former NRL players Dan Sarginson, Tui Lolohea and Pauli Pauli. The Red Devils also have former New Zealand and Samoa utility Krisnan Inu on their books but he did not play at the weekend.

"The Rugby Football League is now analysing Sunday’s match to determine how many players from each team will also be required to self-isolate under the test and trace procedures that have been agreed with Public Health England," it said.

"Announcements on the impact on forthcoming Super League and Challenge Cup fixtures over the next two weekends will be made as soon as possible."

The Super League restarted on August 2 following a five-month break due to the COVID-19 outbreak.

Why you might see AFL coaches on construction sites soon